The name Jessica Elvis may not ring a bell but her position as the erstwhile President of the National Association of Nigerian Prostitutes (NANP) should certainly triggers some curiousity.

In this post, you’ll find out some interesting things about Oluchi also known as Jessica Elvis

Jessica Elvis: Who was she?

Jessica was the erstwhile president of NANP until her death. Prior to her election as president, she had been the longest serving secretary of the association. Jessica served as secretary between 2002 and 2015.

When Jessica became the president of NANP in 2015, she had a long list of things from her manifesto that she intended to achieve.

One of her major focus was the welfare of the members. During her campaign, she stated that the welfare of her members will be comparable to those working in prestigious government organizations like NNPC and CBN. Her first step towards this plan was to get her members registered. This included giving every member of NANP spread across the 36 states of the Federation ID cards.

Jessica also planned to launch a new website which will have the profile and contacts of registered members. Their profiles will be easy to see and anyone in need of their service just needs to go online to make his/her choice.

According to Jessica, she planned to also tackle the problem of insecurity by ensuring every member of NANP is safe and secure as they carry out their duties. During her tenure, there won’t be cases of her members being molested or killed.

She also planned to approach the government to see how they could support NANP to make their lives better. Jessica reiterates that they supported the president during the campaign and they expected him to reciprocate their gesture by looking into their plight and recognizing them as a part of the society.

As president of NANP, Jessica controlled over 20 000 prostitutes spread across the country.

Just in case you don’t know what the NANP does. According to Wikipedia, the National Association of Nigerian Prostitutes (NANP) is a professional organization in Nigeria that has been set up with the goal of assisting adult sex workers.

Basically, the organization was formed to give prostitute a voice to oppose the country’s law that tend criminalize prostitution.

According to NANP, their campaigns have been tailored towards equal access to healthcare, safe work environment as well as protection from abuse and exploitation.

Jessica enjoyed a lot of benefits from her career as a prostitute or rather peacemaker.

It seemed quite lucrative for her as she claimed to have built houses in Lagos and Abuja. She also started and ran several businesses with the income from her work.

Additionally, the proceeds have been able to train her only daughter in school. Apart from these, Jessica was also able to put a roof over the heads of her parents.

Marriage seems to have left a sour taste in Jessica’s mouth. When asked about marriage, Jessica reiterated that she hated marriage and it was what drove her into prostitution.

Jessica had plans of retirement but prior to her exit, her lifelong ambition had to be fulfilled which was to have s*x with Real Madrid and Portuguese soccer star, Cristiano Ronaldo as well as Nigerian music sensation, Wizkid. According to Jessica, her colleagues were also aware of these plans.

According to her personal statement, Jessica was a devout Christian and a firm believer in Jesus Christ. She never missed church activities and there were times she would declare fasting and prayer for ‘business’ to come. On those days of prayer she ensured that sex wasn’t part of her schedule.

When asked if she thought her job might interfere with her faith in God, Jessica emphasized that heaven is her home and many will be shocked on the last day especially those that have said that she and her colleagues are hellbound.

During her lifetime, Jessica had a boyfriend and according to her. She was such a jealous lover and her overprotection almost led her to cut off his penis when she discovered he was cheating on her. Interestingly, her boyfriend didn’t know what she was really into as he thought she was just a businesswoman.

Jessica built a modest home for her parents in Edo state but they also didn’t know what she was really doing for a living.

Jessica had a teenage daughter that recently completed her secondary school education at a popular private school in Ikotun, Lagos.

She’s popularly called Sabina Green although but that’s not her real name. Sabina is quite brilliant and she was crowned the overall best in Mathematics and Chemistry at her school during her graduation.

Sabina’s desire is to study Biochemistry at the university and she intends to apply for JAMB soon. But she claims that she won’t be studying her desired course in Nigeria.

Jessica Elvis died on the 25th of October, 2015 as a result of a heart related disease. She died in a hospital in Edo State. According to Sabina, it was negligence on the part of the hospital that caused her mother’s death as they didn’t respond on time to the situation.

The Secretary General of NANP sent a text message to one of the media personnels about Jessica’s death. The statement confirmed Jessica died as a result of a heart related condition which she had battled with for years. Following the death of Jessica, Tamar Tion was elected the president of NANP and Sandra Efosa as the secretary general. 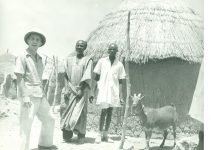