Ruth Kadiri is a Nigerian actress, screenwriter and film producer. Ruth is one of the most sought-after scriptwriters in the country. To know more about Ruth’s family background must check songsforromance .

In this post, you will get to discover many things you didn’t know about this fast rising actress and producer.

Ruth Kadiri was born on March 24, 1988 in Benin City, Edo State, Nigeria where she also hails from.

The actress revealed in an interview that she is the first child in her family and has a younger sister. While growing up, she used to live with her mother and sister, while her father lived outside Nigeria.

Also, Ruth disclosed in an interview that she grew up like every normal kid. She grew up in Ajegunle, a low-income suburb of Lagos State but even as a child she always knew what she wanted. Click here touroftoowoomba for more information about Ruth Kadiri .

At that time, in her room, she had written in a book that she intends to rent her own apartment by the time she was eighteen. When her father saw it he asked where she is going when she clocks eighteen and she responded by saying, “she wants to be able to get her own apartment and make her own money’. Her father laughed it off but she believes that decision helped her cultivate the desire to make her own money and do it the right way.

Overall, Ruth revealed that she went through several obstacles, discriminations, and rejections while growing up. Also, she had to shoulder a lot of responsibilities but she is grateful for what she has become and what the future holds.

The actress is a graduate of Mass Communication from the University of Lagos and Business Administration from Yaba College Of Technology.

Ruth once revealed that while she was a student, a female lecturer wanted to seduce her and make her a lesbian. According to Ruth, the lecturer took a special interest in her and started tracking her every move. She knew the days she wasn’t in school and even her grades.

There was a particular day, she missed a test and had to go to the lecturer’s office and it was that day that the lecturer tried to seduce her but she quickly left the office.

The actress revealed that her passion for acting started in the church, and this explains why she sees her career as an obligation to God.

As far back as her days in secondary school days, she had begun writing stories. This was even before she began attending auditions for movie roles.

Her first audition was at the Wale Adenuga Studios where she met a friend, Victor Eze, who had a writing school. She attended his school and graduated. Subsequently, she wrote her first script, ‘Wild and Dirty,’ and after that, she continued to write some more until she started getting roles in movies that used her scripts.

One of her first movies was, ‘Boy’s Cot’, where she starred alongside Nonso Diobi, Uche Jombo, Jim Iyke and Mike Ezuruonye.

The actress has featured in close to a hundred movies since then. She has written and co-written several movies, some of which she has featured in. These include Matters Arising, Heart of a Fighter, Ladies Men, Sincerity, First Class, and Over the Edge.

Ruth is also a philanthropist. She launched her own foundation called Ruth Kadiri Kids which was set up with the objective of helping the underprivileged children to achieve their goals and dreams through financial donations and inspirational lectures.

Ruth is yet to marry and she once disclosed in an interview that she has no control over when she would meet the right person or get married but would love to raise a family in the right way.

Although it was once reported that she has a boyfriend, a popular yahoo boy who shuttles between Nigeria and London. It was revealed that her supposed boyfriend is married and has kids in London. Interestingly, his wife is fully aware of his relationship with Ruth.

In the past, it was reported that she dated Nollywood producer Stanley Ebonine, but the two soon drifted apart.

However, there were rumours in 2017 that she was engaged to an unidentified man.

Some of the movies she has featured in are highlighted below:

The actress revealed in an interview that Nollywood has taught to be patient and to understand that people’s destinies are different. Also, she has learned to understand that not everybody will appreciate your style, not everybody will understand where you are coming from but all you need as a a person is, ‘focus’ because the easiest thing to do is to get distracted. According to Ruth, it is very easy to follow the trend but if you have a style and you are able to stick to it, as long as you know that you are doing the right thing, you will get to where you desire.

Ruth Kadiri has managed to stay clear of controversy especially with her personal life by keeping it private. This explains why she hid the identity of her lover when she got engaged in 2017.

Although, her name was once brought up when there was a controversy between a pastor, Apostle Suleiman, and Stephanie Otobo. It was said that Ruth was one of the many women the pastor had an affair with in the past. When Ruth was called to respond to the allegation she was in shock as she called it nonsense and ended the conversation.

A few years ago, when Ruth Kadiri acquired a Range Rover Sports car, there were some claims that it was a man that bought it for but the actress disclosed that she paid for the car with her own money. 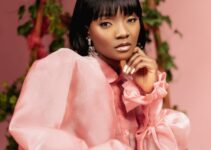