Nigeria is a country that is blessed with diverse cultures and people. There are many ethnic groups in Nigeria that make up the cultural sphere. Culture can be viewed from various angles. It could be from the way they eat, live, dress, and several other factors. In Nigeria, there are different types of culture, but the most popular are the Yoruba, Hausa, and Igbo cultures. In this article, the various types of culture in Nigeria would be looked into extensively.

The types of culture in Nigeria would be discussed below:

The Yorubas believe they are descendants of Oduduwa, the god of thunder. They believe creation started from Ile-Ife, hence Ile-Ife is the traditional headquarters of the entire Yoruba people. In today’s world, most Yoruba people are traditional worshippers, while others are Christians and Muslims.

One notable thing about the Yoruba language which is spoken by the Yoruba people is that the language has several variations. The variations include dialects spoken by different towns in the land, dialects like “egun”, ” egba”, “ijesha”, ” ekiti”, and others. Another outstanding thing worthy of recognition is the outstanding manner an average Yoruba man or woman dresses. They were outfits made from “aso-oke” and “adire”. The men wear “agbada”, “sokoto”(trousers), and use a “fila” (cap) on the head, while the women wear “buba” and “iro” and use “gele”(headgear) on the head.

The Yoruba people are popularly known for their “bata” dance and the “gese” dance. These dances are entertaining because of their beautiful dance steps and the drums used to produce the rhythm. Yoruba culture is keen on respect for the elderly. They are also keen on greeting in a manner that is worthy of emulation. The boys prostrate on the ground while the girls kneel.

The Hausa ethnicity is the largest in West Africa. They are based in the northern part of Nigeria. The Hausa live in towns and villages where they raise livestock and grow crops. They also engage in trade. The Hausa people are mostly Muslims while a few are Christians. The primary language they speak is the Hausa language. The oldest city in the history of Hausaland is Daura. It is located in northern Nigeria. The city of Daura is known as the cultural centre of the Hausa.

One outstanding factor of the Hausa people is how the Hausa men and women dress. The Hausa men wear “jalabia”, ” babban riga”, “juanni”, and caps known as ” fula”. The Hausa women on the other hand wear wrappers(abaya), hijabs, blouses( ), head ties( ), and shawls. An average hausa woman is known to adorn herself with plenty of jewelry and accessories. These women are also known to draw Lalli or henna paintings on their hands and feet.

The Hausa people are popular for their local delicacies. These delicacies have been their cultural identity for ages. They include “kunu”, ” tuwo shinkafa”, “suya”, ” funkaso”, “kosai”, ” kilishi”, “tuwo da miya”, and other delicious delectables.

The Hausa are believed to be the product of Nok culture which is an ancestral nation. The Nok culture is a culture that existed in Nigeria around 1000 BCE and disappeared around 300 AD under unspecified occurrences. The Hausa people are known to be cattle rearers, farmers, iron smiths, and traders and are heavily into hiding and skin.

The Igbo people are a kind mostly found in the eastern part of Nigeria. States like Abia, Anambra, Enugu, Ebonyi and Imo are predominantly Igbo. Igbos can also be found in some parts of Delta and Rivers states in Southern Nigerian. The Igbos are popularly known as Ndi Igbo. They are mostly traders and farmers. In Nigeria, the Igbos can be found in every part of the country.

Igbo people are mostly Christians. They are of the Catholic denomination. A handful of them is Muslims, while others are of the Igbo traditional religion which is known as ” Odinani”. Their supreme being is “Chukwu” who created everything on earth. Traditionally, the Igbo people believe in reincarnation where a dead relative is believed to be reborn into the family.

Another notable fact about the Igbos is that they are known to use Proverbs. Before the advent of the colonial masters, the Igbos were already a structured entity. They were politically grouped into Nri, Agbor, Aro Confederacy, and Onitsha chiefdoms. It was later after the British colonial masters came that Lord Fredrick Lugard introduced the Eze system. Also, following colonialism, some aspects of the Igbo culture changed. These changes include the conversion of building houses with mud and thatch roof to buildings with concrete blocks and corrugated roofing sheets. The “Ohaneze Ndigbo” was formed in 1978. They speak on behalf of the entire Igbo people in Nigeria.

In Igboland, the “Umunna” is the most recognized strength. The Igbo people are industrious and hardworking. They are also known for their special traditional Igbo calendar, where four days make a week, seven weeks make a month, and thirteen months a year. In today’s Igbo world in Igbo communities and villages, this traditional Igbo calendar is still used to calculate market days. The traditional Igbo banking structure for saving and borrowing money has always been “Isusu”. This system is still in operation today.

One amazing fact in Igbo culture is that their new year starts with the month of “onwa mbu” which occurs in the third week of February. Their traditional kick-off of the year mostly happens in June in most Igbo villages and towns. The Igbos are believed to be very skillful craftsmen as evidence of their skill was found in a town called Igbo ukwu in Anambra state. These artworks date as far back as the 9th century.

In Igbo culture, Yam is the main dish and they, therefore, celebrate Yam as a festival in Igboland. This festival is known as the New Yam festival. It is always celebrated every year at the beginning of every Yam harvest. The Igbos are also known for their unique dance which they dance during traditional festivals and events. These dances include “atilogwu” dance, “ogene” dance, “egedege” dance, “mmanwu” dance, “Ikpirikpi-ogu” dance, “nkwaumu agbogbo” dance, and other amazing dances.

An average Igbo man wears a top called “Isiagu ” and trousers. They match it with a cap depending on whether the man is titled or not. If he is a titled chief, he would wear a red cap otherwise he would wear a normal cap. An average Igbo woman on the other hand, wears a blouse with a big puffed sleeve and two wrappers with head tie. Both men and women can tie wrappers in Igbo culture. Palm wine is the most popular alcoholic drink in Igbo land. Kola nuts are also of great importance in Igbo culture. Young people address their elders with respect by calling them “mazi” or “dede”.

The Efik people are an ethnicity that is found in southern Nigeria. They are based in Cross River state. The Efik culture is associated with the lion which is the cultural symbol. The Efik speak the Efik language. They also borrow some of their words from the Oron, Efut, Okoyong, Balondo, Ekoi and Efiat. The name Efik translates to tyrants or oppressors. Efik people have been popularly referred to as ” calabar people” even before the 19th century. They called themselves Efik when they settled in Creek town.

Before the coming of the British colonial masters, the Efik was involved in the slave trade. They were both middlemen and slave traders. Before the arrival of the missionaries in 1846, most of the Efik traders were very fluent in English and other European and African languages. They could write, read and speak fluent English because many families had their children sent to European captains to teach them their language, English language inclusive. They were also taught the details of international trade.

Efik people that were heavily involved in the slave trade got their merchandise when they capture people when they go to war. They also get their merchandise when they set confusion in the communities they target. After that, they then kidnap the people and send them to Calabar where they sell them. The Efik were active slave traders and were known in the international market around the 18th century. The Efik rulers signed the papers to stop their exportation of slaves in 1841.

In Efik culture, they have several secret societies that maintain law and order. They have the Ekpe, Nsibidi, and Nyana Nyaku. The Ekpe society elaborates on the system of symbols which is the “nsibidi”.

After the Efik people stopped their dealings with slave trading, they started exporting palm oil, rubber, barwood, redwood and ivory. The Efik have been international traders for as long as time can tell. They did business with the English, Dutch, French and Portuguese.

The Efik people are known for their sumptuous delicacies such as Edikang Ikong soup, Afang soup, Ekpang Nkukwo, Afia erere, Editan soup, Atama soup, Ukwoho, and other amazing dishes. Another dish prepared by the Efik people is called Iwewe. This dish is served to toddlers and the elderly. It is a dish prepared with boiled yam that is mashed and prepared with little palm oil. The Efik people are lovers of fish and meat. They cook their dishes with enough meat and fish and plenty of crayfish. In typical Efik delicacies, you can find dog meat. They also cook with goats and chickens. They produce their drinks such as ” ufofop”(dry gin), “mmin efik” (palm wine), “nnayannyana” (lemongrass tea), and “mmin eyop”.

Before the colonial period, the Efik people wore clothes made from raffia palm(ndam). They also wore a gown called ikpaya. It was also made from the raffia palm. Back then, before the Europeans influenced dressing, an average Efik woman adorned her legs and arms with brass rings. The women that adorned theirs with ivory accessories were rich and influential.  When the missionaries then arrived in 1846, they then influenced the dressing of the Efik women. The women started wearing big dresses that were sown like the Victorian style. These dresses are known as ” onyonyo”. To date, the onyonyo is worn by Efik women during big festivals and weddings. It is a common occurrence for an Efik bride to wear two onyonyo in her traditional marriage. For an average Efik man, the traditional wear comprises a white long-sleeved shirt, a long Neckerchief made from costly material which is known as “okpomkpom”. This outfit is worn with a wrapper that is tied around the waist. The wrapper is known as ” usobo”. 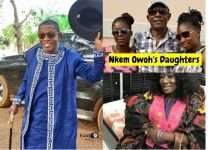