Peju Ogunmola is one actress that doesn’t seem to like being in the news. You would hardly ever find her granting interviews or being the subject of speculations.

And this seems to be the newsmen’s grouse with her as they think she’s either a snub or that she doesn’t know how best to express herself with them.

But whatever the case, one thing is certain, Peju is a talented actress and in this post, you’ll find out many interesting things about her that you didn’t know. 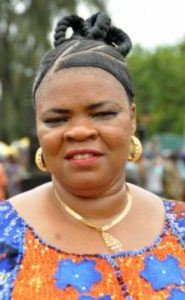 Peju Ogunmola was born in the 1960s and she’s the daughter of stage legend, Kola Ogunmola. She’s also sister to Yomi Ogunmola, another popular Yoruba actor. It would be recalled that Yomi Ogunmola passed away in 2003.

Peju is married to the iconic comic actor, director and producer, Sunday Omobolanle popularly called Papiluwe. She married him as a second wife and their union has produced a son, Sola.

In case you’re wondering who Peju’s husband is, below is a brief overview,

Sunday Omobolanle a.k.a Papiluwe was born on the 1st of October 1954 at Ilora, a town in Oyo State in Nigeria.

Sunday has been featured in several movies. He has also been involved in many stage plays. Also, Sunday has scripted, directed and produced several movies, some of which include, Adun Ewuro, Konkobilo and Oba Alatise.

Papiluwe was recently honoured with the National Award, MON by Olusegun Obasanjo, the former president of the Federal Republic of Nigeria.

In case you’re wondering where Papiluwe got his name from, this is the story behind the name.

According to him, Aluwe was given to him by his late boss, Baba Mero. In the time past, he used to be very social and he never missed KSA shows at Ariya hotel. In the course of these shows, KSA used to sing for him and at some point, the musician added Papi to the name Baba Mero had initially given him, hence the name, Papiluwe.

Often times, people often refer to Sunkanmi as Peju’s son but this isn’t correct. Sunkanmi is actually the son of Papiluwe’s first wife, Kudirat Folashade. If you don’t know Sunkanmi Omobolanle here’s a quick overview of his profile.

Sunkanmi is a graduate of Business Administration from the Olabisi Onabanjo University in Ogun state. He seems to be the only child that has followed the career path of his father. Interestingly, Sunkanmi has grown to become a prominent face in many Yoruba movies and has also gone on to produce his own movies.

Initially, Sunkanmi’s father didn’t want him to act and this is what Papiluwe said about his son’s acting career in a recent interview.

According to Peju’s husband, Sunkanmi began acting when he was nine years old. But when he went to the Military School in Zaria and came back, he decided to focus on acting fully. Initially, Papiluwe didn’t want him to become an actor because the remuneration in the acting industry was really poor at that time. But the young man insisted on following his passion and as they say, the rest is history.

Sunkanmi is currently married to his beau Abimbola Omobolanle. Abimbola is a Dublin based businesswoman. Their dating story is quite interesting as Sunkanmi claimed that they dated for nineteen years before tying the knot.

How Peju met her husband

In an interview with City People, Papiluwe revealed how he met Peju and how long it took her to agree to his proposal.

At that time, Peju’s dad’s home was an abode for many young entertainers as he was like a father to many of them. Often times, after travelling all over the country for stage plays, their return base was Pa Ogunmola’s house.

Peju was a young girl at that time and Papiluwe used to joke with her that he would marry her, although he was married at that time.

As expected, Peju would scorn his jokes and respond by saying she wasn’t interested in marrying him. But after a long time of resistance, she eventually agreed to his overtures and they got married. Their marriage is almost three decades now.

Peju had revealed before their marriage that she fell in love with Papiluwe and was convinced about marrying him because he seem to speak more boldly about his marriage plans with her at that time than her other toasters.

There are speculations in the media that Peju has an aversion for newsmen. According to a press statement, it has been observed that Peju seems to intentionally avoid newsmen. These reports in the press have highlighted several occasions were Peju had deliberately dodged questions posed at her by newsmen. Most time she would just walk straight to her seat without uttering a word.

Even when she’s working on a new project or movie nothing has ever been heard from the camp of this veteran actress.

This has made many of them think that she’s not confident in the use of language especially English. Interestingly, she doesn’t seem to have a problem facing photo journalists as she’s always on hand to take photographs with them.

As expected, Peju hasn’t responded to these allegations. She seems to have kept with her unspoken decision not to grant interviews to journalists.

In July 2017, Peju Ogunmola and Tubosin Odunsin were guests at the Osun State University (UNIOSUN). The program was tagged Uniosun Illumination and it was from the 20 to 22nd of July.