Cee-C is a fast-rising celebrity and household name. What is it about Cee-C that makes her fans adore her. Find out in this blog post.

Her real name is Cynthia Nwadiora, a 26 years old lawyer who became widely known during and after her time in the Big Brother Naija house. Big Brother Naija is a reality show in which contestants are isolated and made to compete for a large cash prize worth $100000 at the end of the show by avoiding being evicted by viewers. This is quite a huge task. To be in the good books of viewers will not only border on behavioural assessments but preferences of other individuals.

This is one of the reasons Cee-C has become a star.

She was born in 1993 in Enugu state which makes her 26 years old. Cee-C’s father’s name is Micheal Nwadiora.  She grew up in Lagos, the Southwestern part of Nigeria. She attended the Heritage Academy and completed her Secondary school education at Federal Government Girls College, Ibusa, Delta state. She went on to have her university education at Madonna University, Okija, Anambra state where she graduated with an LL.B Law in 2013. After which she proceeded to law school in Lagos where she graduated in 2014 as a professional and certified lawyer. It recently came out that Cee-C has two siblings, a brother whose name is also Micheal Nwadiora II and a married sister. The latter shared that she had been getting hate mails because of her sister’s actions at the Big Brother Naija house. She was also Cee-C’s social media manager while she was in the house.

While on the show, Cee-C made some questionable decisions just like many other contestants. Nonetheless, her storyline was probably one of the most interesting ones to have followed in the BB Naija 2018 season 3. One of the things that made viewers like her the most was her tumultuous relationship with the housemate, Tobi. While many thought her to be possessive, others defended her saying she only acted as any other woman would.  After their relationship went south in the house, Tobi immediately got hooked up with another housemate called Alex. This was a source of controversy to viewers and fans of either ladies. Some arguing that all Alex wanted was money while Cee-C had a true love for Tobi. Alex later denied having anything to do with Tobi regarding him as her very close friend.

Even though some thought Cee-C will never talk to Tobi again, she wished him a happy birthday some time ago which has made many think things did not end as bad as it seemed.

Another reason tongues were set waggling when Cee-C was in the house was when in a conversation with her fellow Big brother Naija housemate, BamBam, she said,

While in the house, Cee-C was the inmate with the highest number of followers, 700,000 on Instagram.

Rumours were also being spread around about Cee-C and Leo, another Big brother Naija housemate. It was said that Cee-C threw a surprise birthday party for Leo. When in an interview with Arise TV and asked about the situation of things between herself and Leo, Cee-C described him as an amazing and great guy whom she was not close to during the Big brother session. She confessed to liking him and said she was just being there for him as a friend being a loyal person that she is.

Cee-C also revealed acid threats that have been made to her in recent times. She said she revealed this so that many will know that being a part of a reality TV show also brought its pains with it, asides from the fame and glam.

Cee-C; Life before and After Big Brother Naija 2018

Currently, Cee-C is a lawyer, model, actress, and fashion enthusiast. She describes herself as an ardent novel reader, cook and tennis lover. She also loves trying out new things. This was one of the reasons she was full of confidence and excitement on getting to the Big Brother Naija house in 2018. She described herself as an “eye candy” and a “mentally attractive” person.

She says her biggest dream is to become a filmmaker and this she sought to go after by going to the film industry.

Cee-C also loves to live a quiet life and amazingly, she still has very little known about her on the social media space.

Prior to getting on the show, Cee-C worked for an advertising firm called Esmic International. She also formerly served as a trainee at Sterling Partnership Legal Practitioners and Fidelis Oditah &Co in Lekki phase 1, Lagos state Nigeria.  When asked how she intended spending the money won from the Big Brother show, she said she planned to spend her win money on giving back to the people and encouraging the Ministry of Education to introduce ‘self-development’ into the school curriculum.

Cee-C came out as the first runner up.

Even though Cee-C didn’t come out as the winner of the show, her fans contributed #2 million naira for her. This is asides other expensive gifts the beloved housemate got from people who simply loved her.

After the Big Brother Naija show, Cee-C received so many endorsement deals by top brands in Nigeria while generating millions from adverts and promotion deals. She scored an endorsement deal with Slim Girl Shape Wear, an American-based company that focuses on shapewear for women. This brand was once endorsed by the likes of Black Chyna, Kim Kardashian, and Amber Rose. It also turns out that she is the ambassador for an eyewear store called House of Lunettes.

Currently, she has over 1.3 million followers on her official Instagram accounts. Cee-C is one of the richest and most influential models and television personalities in Nigeria with a net worth estimated to be 30 million naira.

This way you will never miss a thing about the beautiful and fast-rising superstar, Cee-C. 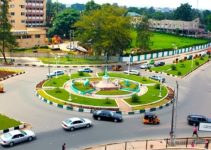