Born in Akwa-Ibom, Didi Ekanem is a fast rising Nollywood actress. Asides her acting skills, she’s particularly popular for her big bum which she doesn’t hesitate to flaunt on social media.

In this post, you’ll find out a lot about the exceptionally talented Didi Ekanem.

Didi Ekanem attended the University of Port Harcourt where she studied Linguistics and Communications.

Prior to gaining admission into the University, Didi attended a couple of secondary schools. She initially attended Federal Government College, Ikot Ekpene before proceeding to Macdonald Memorial School where she completed her secondary education.

Didi started acting while in the university. She was involved in stage acting for a year before venturing into acting in Nollywood.

As an actress, Didi’s goal is to win the Best Movie Actress Award in Nollywood and to gain international recognition by becoming the first Nigerian to win an Oscar for starring in a Hollywood movie.

Some of the movies she has featured in include:

Didi was asked a while back what she does first when presented with a script and this was her response.

“Before, what I used to look out for was how many scenes I was going to do but right now when I get a script, the first thing I look out for is the story. I just quickly go through the story and then after the story, I go to my character to know whether my character is challenging or not.”

In her few years in Nollywood, Didi has this to say about her experience so far in this industry.

First, she says that, ‘Jump and Pass’, a movie directed by Desmond Elliot is her favourite movie so far.

About her big bum

Didi’s big bum has always being the centre of attention in the industry and this is what she has to say about it all the attention.

“It’s a good feeling and a wonderful one. But I won’t lie to you, as much as I love it so much, I just wish people would focus more on my talent than my bum. All the concentration out there is on my bum not my talent. I would honestly wish people to see me as a talented actress not a sexy one. But my bum is not allowing people to see me deep down, to see the person and the talent. Seriously, is your bum natural? People always say this whenever they see my bum. Last time I was on Linda Ikeji, I read comments people made and there were more questions whether my bum was real or worked on. Some said it is made of plastic but you are here now and can see there is no artificial embellishment or augmentation. My bum is real, it’s like 101% real, I was born this way, I was born like this. I’ve had it since I was in JS1, in fact that was when I started noticing it. That’s when you started noticing how big it is? Exactly, and It’s been like this. Then I never loved it, if I have to tell you the things that I’ve gone through because of my mum, you won’t believe me”

Also, Didi say her big bum has caused her altercations with fans in the past. As a matter of fact, she once slapped a fan that grabbed her bum at the club.”

In the past, there have been speculations that Didi’s big backside was as a result of a buttock enlargement surgery but she has since gone on to dispel those speculations.

Also, many are of the opinion that females with big bum are usually lazy during sex. But according to Didi, her big bum is an asset for her during s*x. As a matter, she’s even more active than most girls with smaller bums.

Recently, Didi Ekanem dropped a word of advice for ladies concerning marriage and this is what she had to say:

“Don’t let anyone convince you to believe that being Single is fun, meanwhile they are crying in their lonely corners every night. I understand that some men are quite abusive but this only happens when you end up with a man that isn’t meant for you, or a man that is possessed with evil spirit. How did I get here? Laughs, the truth is usually served in black and white, that’s why people don’t like it. Yes am not married, but I pray to God everyday for my Husband to come through because I can’t wait to bring my beautiful babies into this world. Am not about that single life of drinking and smoking excessively out of frustration, I’d rather smoke and drink just for fun. Anyways, I know some of you would say; madam speaks for yourself. Yea right, wait till all your friends are married except you. Don’t forget that this is just my opinion.”

Didi Ekanem’s dating status is a question fans and interviewers often ask. She is currently single and this is what she has to say about her ideal man, “I want a man with a ‘bad boy’ character.

Recently, Didi launched a clothing line called “ODOT.” According to her ODOT is an abbreviation of her native name, Odotukpono which means, “I deserve honour.”

Didi’s dream is to build her fashion business into a fashion and beauty empire within the next five years.

One of Didi’s hobbies is dancing, she recalls how she would often dance in the house as a young child and her siblings would cheer her up while her dad sprays her money.

According to Didi, she was addicted to watching Nollywood movies when growing up. And her obsession was often heightened whenever she was on holiday from school because she had more time.

And secondly, her inspiration in the industry is Mercy Johnson and she looks forward to acting along side her very soon. 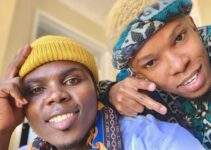