If you’re avid follower of Yoruba movies, you must have heard the name Tunde Tilapia.

Ever since, this young actor burst into the Yoruba movie scene several years ago, his fame has grown in leaps and bounds

Tunde Tilapia’s real name is Babatunde Owokoniran. He is one of the fast rising actors in the Yoruba movie industry and he has featured in scores of movies and even produced some to his credit.

Tunde is a protégé of the popular Yoruba movie actor, Odunlade Adekola as it was Odunlade that introduced him to acting after he had approached him at an event.

In this post, you’ll get to discover some interesting things about the talented Babatunde Owokoniran.

When young Tunde lost his mother many years ago, life became a struggle for him. Due to his polygamous background, he found it difficult getting adequate support as a result he could barely make ends meet.

As a way of meeting his immediate needs, Tunde had to join the National Union of Road Transport Workers (NURTW) in Ojuelegba. Joining the NURTW enabled him secure work as a bus conductor. But he had to sleep under the bridge as his income could only feed and clothe him.

After some time, he had a quarrel with the driver of the bus he was working with so he had to leave his job. Tunde was able to find another means of survival as he became a plantain reseller. His typical work day was to go to the Ojuwoye market in Mushin to buy plantain which he would resell at another market.

Things eventually changed for good when he had chance meeting with Odunlade Adekola while he was anchoring a local meeting in Mushin. Tunde seized the opportunity of this meeting as he approached Odunlade and told him of his interest in becoming a movie actor.

Odunlade would later get a role for him and even allowed him stay with him for some time at his Abeokuta home in Ogun state.

Tunde attended the New Mainland Children School and the Ilupeju College. He was able to go to the university when his acting career kicked off. He studied Industrial Relation and Personnel Management at the Lagos State University (LASU) and graduated in 2010.

Tunde married Tunmise Akinwansola on the 8th of May, 2016 at the NAIM Islamic Centre in New Jersey in the United States of America.

It would be recalled that Tunde had staged a public proposal to Tunmise at the Muritala Mohammed International Airport on the 19th of January 2016. Their introduction took place a few days after the proposal.

The couple’s pre-wedding pictures taken in New York got many talking when they were posted on social media.

Tunde’s wife is an American citizen whom he met while she was in Nigeria. At that time, Tunde was having issues with his girlfriend and Tunmise seem to be his succour each time he told her about his problems.

According to Tunde, Tunmise is very caring, intelligent and soft spoken and these were the qualities that drew him to her. As a result, he didn’t have to think twice before deciding he would marry her.

Tunde’s wife gave birth to a bouncing baby girl in New York on the 24th of October, 2017 and the elated Tunde took to social media to celebrate the birth of the new born daughter. Below is an excerpt of the post in which he used a verse from the Quran to compose:

“Alhamdulillah     ………Then We (ALLÂH)…made the sperm-drop into a clinging clot, and we made the clot into a lump [of flesh], and we made [from] the lump, bones, and we covered the bones with flesh; then we developed her into another creation………Qur’an 23:14.”

Tunde lost his mother a few years. It was a painful loss and he recalled his mother’s death via a social media post during one of the mother’s days.

According to Tunde, his mother was his support and defence. Anytime he made mistakes growing up, she was always there to support and keep him from falling.

Tunde never hesitates to celebrate his wife whenever the need arises. On her last birthday, he posted pictures and captioned them with a couple of post in which he talked about how Tunmise has been his rock and greatest joy in life.

Tunde also reiterated that Tunmise was God’s answer to his prayer when he lost his mother. According to him, he had prayed for a caring and loving wife and Tunmise became all that and much more.

Tunde has acted in scores of movies and has also produced several others. His productions include Ilu Alujo, Agbas’se, Sokofun and Oro jade while the movies he has starred in include, Penkele mess, Sokofun and Sunday Dagboru.

Tunde’s mentor in the industry is Odunlade Adekola. He found acting through Odunlade after meeting him at an event.

Tunde’s sojourn into the entertainment industry hasn’t been without controversies. Asides the fame, he says being a celebrity can also be depressing and lonely. And it could be difficult coping if the individual doesn’t have a good support system or a partner that doesn’t understand the nature of his business.

Also, due to the way he sometimes acts, there have been rumours that Tunde Tilapia is gay. But he has since dispelled the rumours by stating that he’s not gay and the fact that he’s happily married to a beautiful woman obviously proves that he is 100% straight.

A bus conductor and plantain seller becoming a University graduate is certainly not a mean feat. This explains why Tunde’s proudest moment was when he graduated from the Lagos State University in 2010.

Tunde studied Industrial Relations and Personnel Management at LASU. He also stated a couple of times that he doesn’t take his graduate status for granted and he is very grateful to God for his achievement. 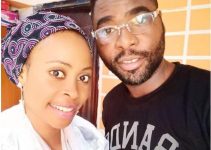