Linda Ikeja is a very popular blogger. She is very rich to say the fact. However, the extent of her wealth had been controversial, and debatable.  No one seems to be sure exactly how rich this top line blogger is.

It looks like even Linda Ikeji cannot say specifically how much she is worth. She expressed surprise when she was told once that her blog is worth $1.2 million and that was in 2012.  It looks like she fast realizes how rich and affluent she has become in recent times.

Some people have the opinion that she is very rich, but some other thing she is not as rich as some would want people to believe.  In this write-up, your confusions about how rich Linda Ikeji is will be put to rest.

In this write-up, we are not just going to mention the exact figure of what Linda Ikeji is worth. Rather, we are going to give you information on how this wonderful lady because as rich as she is today.

Linda has so many properties including houses and a host of other assets. She also has quite a bunch of acquisitions. Her cars are worth up to N50 million.  She also bought several cars for her family members.  She bought houses that worth up to N300 million for her parents also.

The calculation given in this write-up will not be included with these gifts she gave to family members. It will be based on the actual acquisitions she has to her name.  Be that as it may, these gifts she bought for parents and other family members give an indication of how very rich this lady must be.

The figures we arrived at here are based on the current verifiable advert rate on her blog as well as AdSense revenue coming her way.

In total, Linda Ikeji makes up to N19.5 million from adverts on her blog on a monthly basis.

In order to be able to calculate AdSense earning, one first needs to have full understanding of the daily traffic stat.  Findings are outlined below:

From the calculations given above, we can say that Linda Ikeji makes a total of N59,190,000 on a monthly basis.

One can, therefore, say lindaikejisblog.com is worth $10 million.  This means Linda Ikeji should have up to N500 million naira now in cash, even if she is an extravagant spender.

In recent days, however, Linda Ikeji was able to acquire a mansion in Banana Island, and this mansion is worth N500 million. This is more than $2 million. From above, one can say Linda Ikeji is the very first blogger to become a billionaire in Africa.

Linda Ikeji was born on the 19th of September, 1980.  She is a news carrier blogger, a former model, an entrepreneur and a writer.  Among all her enjoyments, she is rather known for her blogging activities.  Her full name is Linda Ifeoma Ikeji. She is presently 36 years of age, and she originates from Nkwerre, Imo State, Nigeria.  Some do call her Queen of Bloggers.  Name of her blog is lindaikejisblog.com.

Her early life and education

She was born into a Catholic family. She is the second child in the family and she started writing as a hobby when she was only 10 years of age.  She rounded off her secondary education when she was just 17 years of age.

She enrolled in the University of Lagos when she was 18 years old where she studied the English Language. She took up a part time job as a writer, model, and waitress to assist her parents and to support herself when she was in school.

Linda Ikeji graduated from UNILAG in 2004. 2 years later, she started her blogging hobby.  She had to visit cybercafé to make her posts since the ternet was not as prominent in Nigeria as it is today.

Linda Ikeji came from a rather poor background. Both her parents were poor, and she had to sponsor her education most of the way. Her ability to break the jinx of poverty have however helped her parents and family members up.

She is not sharing only her riches with her family; she is also sharing her fame with them;  her rise to fame makes it possible for people also to get to know some of her siblings.

While growing up, Linda Ikeji was faced with several financial challenges to the extent that some men asked her to sleep with them for money, but she refused and decided to make her way out of the oblivion.

Linda Ikeji is a philanthropist of no small means.  She runs a projected with the theme: I’d rather be self-made; No thanks.  This is a non-profit project.

She made it public on Hip TV that purpose of the project was to help others and that she had been able to extend helping hands to young girls from the ages of 16 to 25. These ladies have great business ideas and are also willing to go into entrepreneurship.

Under the project, she gave up to N10 million naira in Phase 1. At a later date, she made public the date when Phase 2 would begin.

Linda Ikeji had been recognized on several platforms since she started her career as a full-scale blogger.  Forbes Africa took time off to celebrate African women in August 2012, and that month’s edition was based on the 20 Most Prominent Women in Africa. Two young women were mentioned in that list; these were Linda Ikeji and Chibundu Onuzo.

In 2014 for example, Linda Ikeji was the biggest trend on Google Search.  Nigerians using Google search too searched most for Linda Ikeji. On a program, Focus on Africa aired on BBC; Linda Ikeji was also interviewed on 25th September 2012.

Linda Ikeji had been the places of glory. In like manner, she had her fair share of controversies, like it is the case with many celebrities.  One of the controversies she was involved in was the #SaveMayowa Campaign.

She was equally involved in controversies with some celebrities, like Tonto Dike, Wizkid, Djimon Hounsou, Richard Mofe Damijo and Funke Akindele. Most of these controversies were as a result of publications about these individuals on her blog.

Aside from the above, Linda Ikeji was also immersed in another controversy involving Doyin Okupe. Okupe, however, described the publication that resulted into the controversy as defamatory.

Linda Ikeji equally had some controversies related to Google.  On the 8th of October 2014, her blog was shut down by Google.  This happened around midnight n the date above.  Google, however, did not give any reason for such shutdown.

At a later date, Kola Ogunlade, who is the Nigerian correspondent for Google responded saying: “We take violation of policies very seriously as such activities diminish the experience for our users.

“When we are notified of the existence of content that may violate our Terms of Service, we act quickly to review it and determine whether it violates our policies. If we determine that it does, we remove it immediately.”

In 2013, Linda Ikeji’s blog was awarded the Best Entrainment Blog by the Nigeria Blog Awards NBA.

Aside from being a blogger, Linda Ikeji is also an author.  Linda ikeji presently drives different cars, like Infiniti FX35. She also has a Land Rover Range Rover. Her home is huge and impressive.  The truth is she is a real famous star.

This blogger also has a very interesting love life.  Sometimes back, Linda Ikeji dated Dan Foster, who is a radio presenter.  The two later broke up.  No one knows who her present boyfriend. In conclusion, Linda Ikeji is a spinster currently. 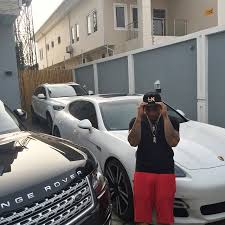