Genevieve Nnaji is a Nigerian actress, a movie producer and a designer. The Nigerian screen goddess who is known to be selective of her movie roles happens to be one of Nollywood’s biggest earners (and makes more from endorsements alone than what she makes on her acting). The mother of one represents various brands and has a clothing line.

Genevieve was a brand ambassador for Lux and while the deal was rumoured to be worth N40Million naira, she’s not currently on the deal anymore with Lux deciding not to renew the deal. She also represents Cintrion Energy Drink which got her around the same amount in endorsement fees. In endorsement fees, Genevieve was rumoured to have gotten N50Million naira from the fashion brand – Polo. 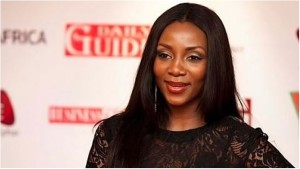 Together with Chelsea FC star John Obi Mikel, Genevieve represents Amstel Malta with the deal said to within a range of N30Million naira. MUD Cosmetics could also count themselves lucky to have captured Genevieve’s signature when she agreed to sign for them but the details and endorsement fees was securely kept behind closed doors. The biggest of her arrays of endorsements is with telecommunication brand: Etisalat, which was said to be in excess of N90Million naira. But she’s smarter than relying solely on acting (which she barely has time for) and endorsement deals (which would inevitably expire or could be cancelled at any time).

She owns the clothing line St Genevieve which is a fast growing fashion brand both in Nigeria and abroad, and she is rumoured to be working on starting a modelling agency. In 2013 Nnaji bought a N220 million ($2.2 million) home in highbrow estate, Parkview Estate, Ikoyi. Sometimes last year, she bought a mansion in Lekki (which was her fourth house) and handed the keys over to her parents. She owns a few very expensive cars – A Toyota 2014 Venza, a Range Rover Evogue and a Mercedes G-Wagon. Genevieve is undoubtedly the most industrious female celebrity in Nigeria.

Genevieve’s current net worth stands at an authoritative $7Million.