Often times, fresh graduate look forward to working in the banking industry because of the good pay. Also, banks usually employ graduates from a wide range of discipline which means you can work in a bank even if you studied medicine as long as you’re willing to be trained to fit into the banking system.

Consequently, the good pay and the low barrier of entry into the industry makes banking one of the first choice among fresh graduates.

If you’re wondering which bank will be best for you in terms of pay, you’re on the right page as we have compiled a list of the highest paying banks in the country. However, you should note that the figures stated may vary slightly based on your role in the bank.

Access Bank is one of the foremost banks in the country having merged with Diamond Bank. Currently, the bank has over 10,000 employees and it is said to be one of the highest paying bank in the country with our report revealing that the bank pays entry-level staff around N300,000 monthly.

First Bank is one of the highest paying banks in the country. It is a Nigerian multinational commercial bank and financial services company headquartered in Lagos. It operates a network of over 750 business locations across Africa, the United Kingdom and representative offices in Abu Dhabi, Beijing and Johannesburg set up to capture trade-related business between geographies. The bank specializes in retail banking and has the largest retail client base in Nigeria.

First Bank pays an estimated N250,000 monthly for entry-level staff workers in addition to other allowances and benefits.

GTBank was also founded in 1990 and currently has branches in all the 36 states in Nigeria in addition to its international branches in Cote d’Ivoire, Kenya, Liberia, Gambia, Ghana, Nigeria, Rwanda, Sierra Leone, Uganda and United Kingdom.

The bank is also the most popular bank in the country, especially among the youths. It is said the GTB pays its entry-level employees about N208,000 per month accompanied with other benefits and allowances.

Zenith Bank Plc is one of the best banks in Nigeria and in terms of salary; it is the 5th best paying bank in Nigeria.

The bank was founded in May 1990 by Jim Ovia and has grown over the years to include branches in Ghana, Nigeria, Sierra Leone, South Africa and UK.

United Bank for Africa popularly called UBA was founded in 1949, and the bank is currently one of the oldest banks in Nigeria with branches in 20 African countries and 3 global financial centers: New York, London and Paris.

The bank pays its entry-level staff about N125,000 monthly.

Ecobank Nigeria is a member of Ecobank, a leading independent pan-African bank, headquartered in Lomé, Togo, with affiliates in West, Central and East Africa.

Sterling Bank is one of the major commercial banks operating in Nigeria. The bank has over 2000 employees although some of these staff are contract workers.

Sterling is a full service national commercial bank licensed by the Central Bank of Nigeria and it is also one of the highest paying banks in the country. The entry-level staff at Sterling Bank receive a minimum of N145,000 monthly.

Fidelity Bank is the 7th best salary structure in Nigeria. The bank was founded in 1988 with a total asset of US$6+ billion in 2013.

The bank is also ranked the 4th best bank in Nigeria in the retail market segment in the KPMG Banking Industry Customer Satisfaction Survey (BICSS) in 2017.

Fidelity pays its entry-level staff around N180,000 per month.

In 1979, Barclay Bank sold its shares in the company which led to the bank evolving to become Union Bank of Nigeria Plc, to reflect its new ownership structure.

Union Bank is also one of the top paying banks in Nigeria with entry-level staff earning a minimum of N180,000 monthly.

AB Microfinance bank is one of the top-paying Microfinance Banks in the country. The bank pays its entry-level staff at least N100, 000 per month.

LAPO Microfinance Bank is another high paying microfinance banks in the country. The entry-level salary is N104,000.

LAPO MfB was established in the late 1980s, as a Non-Governmental Organization (NGO) by Godwin Ehigiamusoe in response to the effects of the implementation of the Structural Adjustment Programme (SAP) in 1986.

Currently, the bank has over one million customers and it is approved by the Central Bank of Nigeria (CBN) to operate as a National Microfinance Bank. 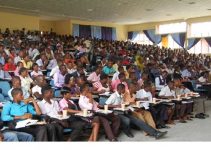