An average Nigerian senator is a rich man in all sense of the word. He is a millionaire, thanks to the huge salary he receives on monthly basis. Aside his basic salaries as a senator, he is also given a host of allowances that make his total take-home pay really mouthwatering. 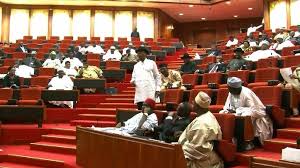 One of the main reasons why many Nigerians rush into politics or into representing their senatorial district at the national assembly is just because of the nice pay pack the senators receive every year.

The basic salary being received by the Nigerian senator is almost higher than what the president receives on annual basis, especially after President Muhammadu Buhari slashed his salary and that of his vice by 50%.  In comparison with what obtains on global level, the Nigerian senator stands out to be one of the most paid, if not the most paid, senators in the world.

The purpose of this write up is to give you information about the actual amount the Nigerian senator receives as pay-pack every month. The pay will also be broken down so that you can know what they get paid for.

What is the take home pay?

What is the breakdown?

The allowances mentioned earlier are broken down as follows:

After a four year duration in the national assembly, the senator is paid an extra amount of N24,000,000. This is payment for a host of other things, like severance allowance, furniture allowance, vehicle loan and accommodation.

In total, the federal government has to spend N2, 625, 810.00 on each senator for accommodation, gratuity, furniture and vehicle loans. If this is added to the basic salary and other allowances earlier outlined, each of the 109 senators earn up to N33, 992,360.

In comparison with what other senators across the world earn, Nigerian senators earn the highest. In the Philippines, senators earn $4,497,957 on annual basis.  Senators in the United States of America on the other hand earn $3,409,422.

Every year, the Nigerian government spent N150 billion naira on the national assembly. However, the federal government at a point had to reduce the money by N30 billion, which reduced the total cost of keeping the senators to N120 billion on annual basis.