Have you ever imagined what it feels like to move around and have to look over your shoulders all the time just in case there’s someone around about to detonate a bomb?

This is what some people in certain parts of Nigeria have to go through on a daily basis.

Nigeria has become ravaged by insecurity; food and financial insecurity have become rampant.

So many have lost their lives and loved ones and cannot even be sure of ever having a stable home again.

Children have gone missing, kidnapped by insurgents with no hope of ever seeing them again.

There are so many over populated camps filled with internally displaced persons.

The state of insecurity in Nigeria has become a National emergency.

Let us look at 5 causes of insecurity in Nigeria.

Causes of Insecurity in Nigeria: #1: Unemployment

The teaming youth are overwhelmed by the high rate of unemployment in Nigeria. There is a good reason for paying unemployed youths a little stipend as is seen in developed countries. When an individual has been unemployed for a long time, they become tempted to partake in dubious activities.

For example when an individual sees children of the rich flaunting their wealth all over the place while he has been unemployed for so long, he gets convinced by bad influence and could decides to go into kidnapping with the hope of making quick money by demanding ransom.

There is an uneven pace of development in different parts of the country. Areas perceived as the oil rich region have its people looking out for more in terms of development and when this doesn’t happen, they feel cheated and would often want to take laws into their hands via vandalization of oil pipelines in a bid to claim their right. This endangers and raises insecurity amongst the people.

The nations resources should be viewed as owned by all and the Government should deliver equal development to all regions of the country.

Causes of Insecurity in Nigeria: #3: Corruption

Most political leaders are more concerned about the monetary value they will get from the posts they hold and have little or no interest in developing its community.

Embezzling public funds has thus gained popularity with virtually no consequence to the culprit. This breeds financial insecurity via increased poverty as monies meant to better the lives of the people fails to reach them.

When the legal system has failed its people and allows people who have committed all sorts of atrocities to go free, then there is a break down in society. People often feel that they can get away with it.

The rich would often buy back their freedom and carry on with their lives as though nothing happened while the poor who cannot buy his way out ends up in jail for a long time. This crack in society creates an aura of insecurity and can only be control when the law is upheld.

Nigeria’s has an extensive and porous border that is poorly guarded. This leaves the borders open for smuggling of arms and ammunition as well cases of oil bunkering along coastal borders. With high influx of arms, cases like the penetration of insurgency are seen and this has lead to a wide spread of insecurity especially in the North East.

With insecurity there is no room for proper development. There is a need for the Government to pull resources together to fight this monster head on. 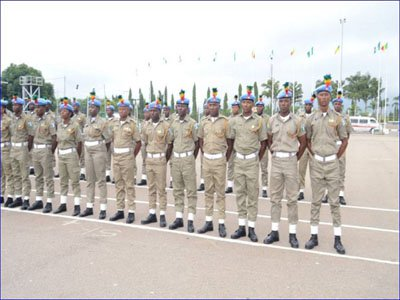