Today fashion has been an inevitable part of our life as clothing is a basic need in man’s life. Many Nigerians both male and female have strived to stand out in the fashion industry worldwide. Here are the top 20 fashion designers in Nigeria.

Deola Sageo hails from Ondo state. She has however made a name for herself in different countries in the world. Deola Sageo is a highly respected fashion designer and is currently rated as the best in the industry. Sageo has been in the game for over 25 years and has won the hearts of even many fashion critics. She is an alumni of University of Lagos. She began her career in 1989 at her mum’s tailoring outfit called Odua Creations. She mostly uses African hand-woven materials in her works. She brings different cultures and arts to life with her designs. Deola Sagoe is from a very prominent Nigerian family that owns Elizade Group. She has however shown her entrepreneurial spirit has led her to success

Folarin Folake- Coker is one of the most respected in the global fashion industry. She was born in Lagos, Nigeria in 1974. She is currently Tiffany Amber‘s creative director.

Folake Coker had her education in both the UK and Switzerland. There, she earned a postgraduate degree after studying petroleum law. She however came back to Nigeria to follow her fashion dreams. She launched her popular fashion brand known as Tiffany Amber in Lagos in 1998. Since then, the brand has grown to become an iconic fashion label. Tiffany Amber has revealed her designs in many fashion shows across the country. She is referred to as the brain behind many fashion shows in Europe, Africa, and the United States.

Lanre Da Silva is one of the top leading Nigerian fashion designers. She has about 450, 000 followers on instagram. Her design label is called the eponymous design label. She is known for her unique lace style designs, gown styles, Ankara/Aso Ebi designs. She creatively combines pattern, print and traditional fabrics. This has made her label successful both in and outside Nigeria.

Frank Oshodi is regarded as one of the best Nigerian fashion designers. He became popular after he styled and designed Agbani Darego, the first Nigerian to ever win the Miss World beauty pageant in 2001. His fashion brand is called “House of bunor”. Frank used to be a model and choreographer just before he went into the fashion designing business. Frank has been active in the Fashion industry for more than 25 years. He has both local and international clients.

Ade Bakare was born in Bromsgrove, he graduated from Manchester University College after which he began working at the fashion houses of Victor Edelstein and Christian Stambolian, purveyors of style to the English establishment in the 80s and 90s where he gained his tailoring skills and experience.

In 1991, he established Ade Bakare Couture where he manufactured and sold his own collections twice a year to Adele Davis of Bond Street, Lucienne Phillips of Knightsbridge and Ambers of Amersham and host of other boutiques in Scotland and England.
He later introduced bridal gowns and brides’ maid’s dresses to cater for the design-conscious bride.

Ade Bakare is the founder and chief executive officer Ade Bakare Couture. He is a popular Nigerian fashion designer that lives in London. He has styled many celebrities.

In 2011 he launched a line of Jersey dresses during the celebrated 2 decades of Ade Bakare Couture in the fashion industry in Nigeria at the prestigious Wheat Baker Hotel, Ikeja.
Ade Bakare’s collections are often tagged as classic.

Lisa Folawiyo is a self-made Nigerian fashion designer. Many love her for the way she creatively fuses traditional West African fabrics with modern tailoring techniques. Her label, Jewel by Lisa was launched in 2005, and has since grown to become a global fashion brand with showrooms in New York and Nigeria.

She uses Ankara to create captivating and luxurious custom fabrics. She has a diffusion line called Line J Label where she showcases the best of Nigerian culture with her Afropop designs. Her clientele includes Beyonce, Kelis,Tasha Smith, and Eve. Her collections have been showcased in Nigeria, UK, US, and South Africa. She has participated in New York Fashion Week 2010 and Paris Fashion Week 2010.

Mai Atafo is a popular male Nigerian fashion designer. Mai Atafo was born and raised in Osun State but later grew up in Lagos. He earned a master’s degree in Information and Technology before he went into the fashion industry where he worked in the marketing and branding field.

Mai Atafo became popular gained attention when he began his bespoke label named Mai Atafo Inspired. He had celebrities in his clientele, such as Banky W, Omawunmi Akinrimifesi, Mercy Johnson, Gbenro Ajibade, 2 Baba, and Stephanie Okereke. Mai Atafo designs different styles and fabrics and for different occasions such as wedding dresses, aso-oke etc. His designs have been showcased at various high profile events. He has over 140 thousand followers.

Zizi Cardow was born into the family of Chief and Mrs. Paul Cunningham Nduneme Iro of umuobiala in Isiukwuato L.G.A of Abia state. She Zizi Cardow is the CEO Zizi Industrial Clothing Company which she started in the year 2000. Zizi have stood out in the fashion industry in Nigeria and Africa for her african fabric and designs. She has gained as clients and fans, a lot of Trendsetters and first ladies, while her works have been featured in all local and some international media including CNN, FTV, SABC and Channel O.

Zizi has won several African and Nigerian awards.
In 2001, Zizi won the prestigious designer of the year award at the Nigerian fashion show.
In 2011 she was conferred the title of Ada Ejiaga Mba1 of Isuikwuato in recognition of her immense contributions towards the growth of the community. Zizi’s 2013 collection featured at the African Fashion week London 2013.

Duro Olowu is a London based Nigerian fashion designer. He was born to a Jamaican mother and a Nigerian father, Olowu was raised in Lagos, Nigeria’s main commercial hub. He spent much of his childhood traveling to and from Nigeria and various cities in Europe. Olowu studied law in London before returning to Nigeria for several years and developing his eye for fashion. The offbeat patterns, rich textures and eclectic colors of his designs reflect both his African heritage and world view.

In 2004, Olowu launched his first female collections. Today his designs are sold all over the world even in prestigious boutiques like Ikram in Chicago and Biffi in Milan.

Olowu have won series of award. In 2005 Duro was voted dress of the year by both British and American Vogue. In 2010, he was named “Best International Designer” at the African Fashion Awards in South Africa.

His brand has become a household name in both the Nigerian and global fashion industry. He is, undoubtedly, a well-respected Nigerian fashion design personality, He is best known for his innovative combinations of colorful African prints which are inspired by his international background. He is very talented in working with patterns, and his designs incorporate the rich culture of Africa. Olowu’s talent has earned him global recognition. World celebrities such as Michelle Obama, Solange Knowles have patronized him. Duro Olowu is married to Thelma Golden, director and chief curator of Studio Museum of Harlem in New York City.

Lola was born in London and started designing in 1993, after graduating from London where she studied fashion designing

Lola hit the fashion industry in 2000 when she created a buzz and upstaged Ralph Lauren’s fashion show at New York Fashion Week.

After considerable success with an impressive following by the international press, Faturoti decided to expand her international presence by spending some time in Milan, Italy. Hence, she took a break from running her fashion business, moved to Italy, and designed, for three years, for other reputable designers.

In 2005, Lola went back to the city launching her comeback collection for Fall-Winter 2007-08.

Ituen Basi is yet another outstanding Nigerian fashion designer. She started her career as an undergraduate of Theatre Arts in the University of Ife. There, she designed costumes for school stage plays and campus beauty pageants. She furthered her studies in fashion at an American College located in London and at London College of Fashion, where she majored in Tailoring and Clothing Technology.

Ituen Basi kicked off her fashion brand in 2009 in Lagos. Now, she is widely recognized for her exemplary skills in print manipulation and fabric treatment. She does not only Ankara designs but Ankara bag and beads.

You must have heard of Yomi casual. This popular fashion brand is owned by Yomi Makun. Yomi casual specializes in African indigenous designs, mostly Ankara materials. His designs stand out and have made him to be rated best amongst others. He has over 450k followers on Instagram. Yomi casual is patronized by many top models and celebrities in the country. He is unarguably one of the top fashion designers Nigeria has produced. Yomi Makun has designed glamorous outfits for Nigerian celebrities such as his brother Ay, the comedian, Desmond Elliot, Aki and Pawpaw and other male celebrities.

Yemi Osunkoya is the founder of Kosibah fashion brand in London which has been in operation since 1991.His brand was named Kosibah in honor of his mother. Yemi Osunkoya specializes in contemporary and elegant couture.

Soares is a fashion designer that has made a name for himself in the Nigeria fashion industry. When Soares was a young boy he spent his time sketching and drawing. This was how his love for fashion began to grow. The brand is one of the most sought- after fashion brands in Lagos, offering services across Nigeria and Africa.

He is the owner of kola kuddus couture. He specializes in African styles made with quality fabrics with good designs. Some of his top clients include Kunle Afolayan and Chief Olusegun Obasanjo (the former president of Nigeria).

Clement Mudiaga owns the Mudi Africa fashion label Mudi Africa. He has built the brand to an international level through sheer hard work. Clement Mudiaga specializes in styling men. He has clients across the continent. He has styled celebrities such as Richard Mofe Damijo, popular TV presenter Frank Edoho and others.

Abiodun Tokunbo is the CEO of Anjy Luminee Couture also known as House of Luminee. She is well known for her stylish outfits. She has styled and designed many celebrities such as Mercy Aigbe, Bimbola Adenuga, Iyabo Ojo and so on. She has more than 350 thousand followers on instagram.

Kunbi Oyelese popularly known by her brand name, ‘April by Kunbi’ is a graduate of the renowned Fashion Institute of Technology in New York. Her brand name is inspired by her birth month April. April by Kunbi was founded in 2010.

She has beautiful bridal pieces and has also designed for celebrities such as Agbani Darego, Tiwa Savage, Toke Makinwa, Seyi Shay and many others. Her outfits and designs are always fun to see because of their colorful blend.

Tolu Foyeh designs and sews stylish Nigerian outfits for celebrities. She has styled several celebrities such as Toke Makinwa, Tiwa savage, Osas Ajibade and many more. She is the one who styled the four ravishing outfits for Adesua Etomi wore for her traditional wedding. Many her inspired by her outfits which she posts on instagram. She is indeed a stylish hub.

She is best known for her unique Ankara fabrics which she uses to make the most stylish outfits. She also has a fashion academy through which she imparts her knowledge. She specializes in male clothing designs. She has over 190k followers on instagram where she shares her designs and outfit. She is one of the most popular female Nigerian fashion designers who deal in male clothing designs. 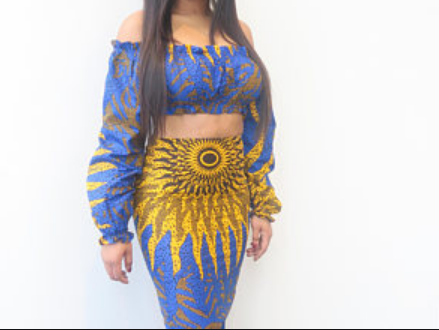 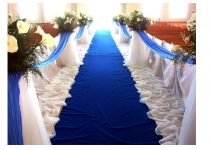 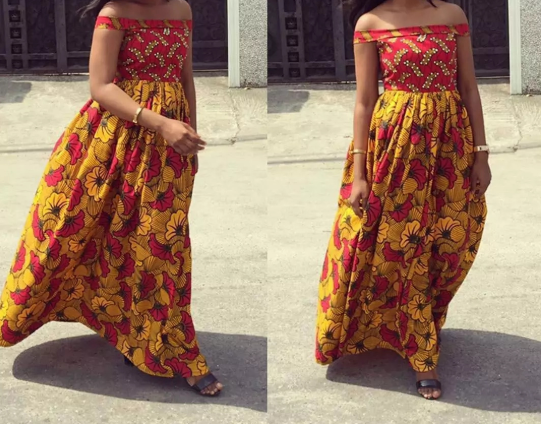