Cattle rearing is one of the most lucrative businesses in Nigeria. This type of business is quite common in the Northern part of the country although it is not limited to this region. 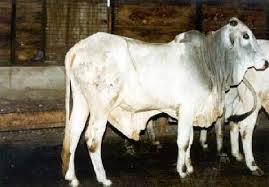 If you have plans of going into the cattle rearing business, there are some important facts you should know about the popular cattle breeds in the country.

In this post, we have drilled down to a prominent cattle breed which is the Sokoto Gudali Cow Breed and we have included all you need to know about this interesting breed.

But first, let’s take a look at the major types of cattle breed based on their utility.

Generally, there are three types of cattle breed and these include:

Now that we know the major cattle breed, let’s take a look at the Sokoto Gudali Breed.

In terms of the Dairy Cattle breeds in Nigeria, Sokoto is one of the most popular breeds under this category. It is one of the cattle breeds that is native to Nigeria and the breed is quite popular for its black and white coat colors with a light underside. However, there are also a few others with multiple coating.

The Sokoto Gudali has a deeper body than the White Fulani breed and resembles the East African Boran and the Sudanese Kenana. It is similar in conformation, size, and origin to the large East African Shorthorn Zebu. The head is long and wide between the eyes and across the forehead, with a straight or slightly convex facial profile. Ears are long, large and convex, sometimes pendulous, although not to the same degree as in some of the Indo-Pakistan zebus. The hump is thoracic in position. The average height at withers ranges from 130-138 cm for males and 116-132 cm for females.

Gudali is a Hausa word for “short-horned and short-legged animals”. They are also referred to as Fulbe or Peuhl zebu in West and Central Africa. Gudali is believed to have descended from the Indo-Pakistani Zebu, which entered the Horn of Africa by way of the Persian Gulf and south Arabia. Arabian invaders spread the Zebu to the south and west over the continent from 669 BC. It is among the short-horned zebu of West and Central Africa. There are about 5 strains of Gudali namely Sokoto Gudali, Adamawa Gudali, Banyo Gudali, Yola Gudali, and Ngaundere Gudali.

Sokoto Gudali has a deeper body and short horns. They have a long and wide head, straight or slightly convex face and long, large and convex ears. Their humps are thoracic in position. The adult male Sokoto Gudali cattle have heights that ranging from 130cm to 138cm while the females have heights ranging from 116cm to 132cm. The adult males weigh between 495kg and 660kg while the adult female weighs between 240kg and 355kg.

The Sokoto Gudali is found in Nigeria and other African countries like Benin, Ghana and Mali. The breed is also found in Cameroon and the Central African Republic. Its smallest population is found in Ghana.

About 90% of the Sokoto Gudali are owned and managed by Fulani and Hausa pastoralists and transhumant herders who feed their cattle on communally owned grazing lands and browse especially in the dry season. They are known for their hardiness to the arid northern environments

Population estimate based on breed level survey in 1992 for the Sokoto Gudali in Nigeria and Ghana is 4 400 000 and 10 000, respectively. The breed is not at risk of disappearance.

The Sokoto Gudali cattle are known for their meat and milk. Mature weights range from 495-660 kg for males and 240-355 kg for females. They are also reputed for their beef quality. Among the indigenous breeds in Ghana, the highest mean total milk yield of 1101.3 kg in a lactation length of 244.8 days was obtained from the Sokoto Gudali under direct hand and machine milking on station. On the other hand, reproductive performance, in terms of age at first calving, which ranges from mean values of 38.6 to 49.5 months, and calving interval, ranging from 378 to 537 days, is low. The latter is attributed to the ovarian inactivity in the postpartum period and to abortions and stillbirths, whose incidence rate were 4.7-5.9%. Their slow and sluggish nature allows them to be used for draft, including ploughing and carting.

The age at first calving of the Sokoto Gudali is between 38½ and 49½ months while the calving interval is between 378 and 537 days and the milk yield is usually 4 – 5kg per day.

Another interesting Dairy Cattle Breed apart from the Sokoto Gudali is the Bunaji which is also known as the White Fulani. This breed is also owned by the Fulani people. They have a white coat color, black eye, ears, muzzle, tail tip, and hooves. They have well-developed dewlaps and humps. They also have long and wide heads and a straight or concave face.

The adults have an average height of 130cm. Adult bulls weigh between 325kg and 665kg, while adult cows weigh between 250kg and 350kg. Other productive performances of Sokoto Gudali are as follows:

Generally, both Sokoto Gudali and Bunaji are poor milk producers when compared to breeds like Holstein Friesian, Brown Swiss, Jersey, and Ayrshire. Hence, they are not recommended for medium or large scale dairy production, but for only smallholder dairy production. Both breeds can be bred for meat and milk production.