For a very long time, agriculture has been the backbone of the Nigerian economy. As a matter of fact, a lot of countries depend solely on agriculture for sustenance and as the main source of their revenue. The Importance of Agriculture in Nigeria can indeed never be over emphasized, especially since we are no strangers to how life was before and during the colonial era when we depended solely on the production of food crops and cash crops. Food crops did more than enough in sustaining the everyday domestic food requirements and cash crops generated bountiful revenue, which pulled the economy on an upwards motion. Agriculture is very important in every country, that´s why it is very important to take care of your crops, you can do that by using this Vertical Indoor Hydroponics Garden System.

The 1970’s saw the oil boom period and with the dominant poor maintenance culture, and nonchalant attitude, Nigeria left the agricultural sector in a pathetic state of retrogression, a regrettable decision that has since been biting hard at both the government and the masses. In the mid 1970’s, Nigeria spent a meagre N113 million, which was the return from oil export to import agricultural products; today, between N8 billion and N11 billion is spent annually to import foods into the country. If Nigeria would extremely invest tangible capital into the agricultural sector, Nigeria, might according reports cut down N2 billion in the first year, a calculated progressive figure as years goes by.You can visit thebestleafblowers.com where you will find leaf blower which are very useful in a farm and garden area.

With the advent of the technological method of agricultural production, employment opportunities can’t but surface to reduce the unemployment rate in the country. Dangote’s tomato paste factory which recently opened in Kano, northwest Nigeria is sure to give a means of livelihood to at least 3,000 unemployed people, including hundreds of tractor drivers from Fastline. The construction of several other production facilities in different states of the country is sure to reduce unemployment rate.

Nigeria’s attempt at monoculture economy, i.e. a country’s reliance on one main source of revenue (Crude Oil); has turned back to bite the country real hard. Price plummet is even beginning to tell on the economy, and show that crude oil isn’t the best commodity to bank on. The government rather than gambling and trying over and over on the Oil and Gas sector, needs to focus on revamping the agricultural sector to push up the continually dipping economy.In the agricultural sector you need some great equipment for better farming like ropes, click here to find some great ropes for agriculture purpose. Good products are also needed for crops to grow such as commercial fertilizer.

Lagos, Nigeria is the most populated city in Africa, and one of the least cultivated for agriculture. It does become confusing from an Agricultural point of view, but should there be a resuscitation of the agricultural sector, there would most definitely be a sharp reduction in the rural-urban migration and over congestion of (supposedly) developed places that are assumed to fare better than less developed ones. Agriculture is important in the even distribution of population.

Agriculture is also important in the re-developing of infrastructural facilities in the country as the revenue generated could be channeled towards creating better means of transport for farm produce and there can be better preservation for agricultural output. The development of the agricultural sector would also help giving a lift to other sectors of the economy by creating the revenues needed for investing in those sectors’ development.

The lists under the topic: Importance of agriculture in Nigeria, a developing country is truly endless and agricultural entrepreneurs need a much needed reassured action from the government than the creation and reservation of different national policy. More grants, more awareness, more market freedom and more manufacturing companies are more practical ways the government can encourage agricultural entrepreneurs and have more people leave the hunt for corporate jobs and join the agricultural production train. 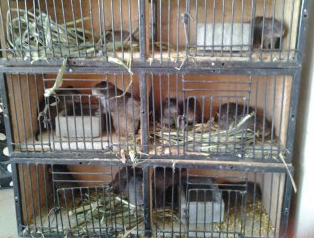