Groundnut is a highly nutritious seed and a very important source of edible oil. Nigeria produces over 1.55 million metric tonnes of groundnut annually and is presently the largest producers of groundnut in Africa and the fourth largest in the world.

Many years ago, the groundnut pyramids of the North were one of the amazing wonders of the country. Unfortunately, these pyramids have gone into extinction due to inconsistent and poorly implemented government policies.

Nonetheless, groundnut farming is still lucrative in the country and you can generate as much as 5 metric tonnes per hectare of land.

Interestingly, groundnut can be cultivated in a wide range of environments. However, it is mainly planted in the Northern part of Nigeria because they tend to do very well in the arid or semi-arid regions. In fact, over 85% of the groundnuts produced in the control are from Kano, Kaduna, Taraba, Bauchi, Borno and Adamawa.

Groundnut is a source of high quality cooking oil. Also, it can be crushed and made into local peanut cakes called kulikuli. It can be boiled or roasted and eaten with other meals serving as an excellent source of protein. In children, groundnut meal is a great source of protein and can be used to treat protein related malnutrition.

As a way of helping you through the process of starting this lucrative business, this article will take you through a step by step guide in groundnut farming.

Groundnut requires a well drainy sandy or loamy soil. Also, the plant needs an acidic soil to thrive preferably a pH of about 6-7. They need about 5 months of warm weather and an annual rainfall in the range of 500 – 1000mm or its equivalent in irrigation water. The soil temperature needed for germination is about 300C.  When preparing the land ensure that all weeds and crop residues are buried before you commence planting.

The planting usually commence during the rainy season. This should be around late March. The seeds need optimal moisture content hence the soil must have had a couple of rain falls before the seeds are planted. The seed can be planted either on a ridge or on a flat surface. The seeds should be placed at a 5 to 6 cm depth. The spacing dimension is 75cm between rows and 25cm within rows.

Groundnut can be rotated with other crops like cereals and guinea corn. This can make the process of nutrient utilization efficient as well as reduce soil borne diseases.

Additionally, phosphorus or potassium based fertilizers can be applied before and after planting. Chicken or farmyard manure can also be applied at least one month before planting. This improves the structure and helps to promote crop development.

When it comes to post planting care, one disease to guard against is the groundnut rossette disease. This disease is one of the most devastating diseases that can affect a groundnut farm. In fact, it could make you lose 100% of your yield as a farmer.

Groundnut plants are also susceptible to pest like aphids, beetles, groundnut borers and caterpillars. In recent times, new varieties of groundnut seeds have been developed which are resistant to the rosette disease. Also, these varieties tend to have drought resistant and high crop yielding qualities. Weeds can also cause damage especially within the first 2 months of planting.

Generally, harvesting comprise a series of processes which include digging, lifting, stocking and threshing. The harvesting of groundnut is quite a tedious process and it’s also expensive. The pods are pulled out from the soil after digging

Usually, the pods ripen 4 to 5 months after planting and harvesting is done when the leaves of the groundnut plant begin to turn brown. The inner rib of the plant turning brown is also an indication the plant is ready to be harvested.

In the absence of irrigation, you can use a tractor driven digger to loosen the soil then you can pull out the plant.

It is very essential to harvest at the right time. This is because if the plant has passed the stage of full maturity, the pod falls of the stalk and remains in the soil. The hardened soil makes it difficult to harvest the fallen pods hence reducing the groundnut yield. On the other hand, if the pod is harvested too early, the pods will be unripe.

You should sun-dry the harvested plant for a few days before snapping off the pods.

The dried pods are usually cleaned and stored in bags stacked on top of one another. Ideally, the bags should be piled on wooden planks to prevent damage due to dampness.

You can extract your oil after harvest by either using a small manual oil press machine or a big groundnut oil expeller. Usually the residue after the oil has been pressed out can be used to feed animals if you have a livestock farm or sold to neighbouring livestock farms.

After harvest, you can plant your groundnuts again, this means you can harvest twice a year. You can plant the seeds in August or September and harvest in December.

Whatever way you look at it, groundnut farming is a very lucrative and it is a venture that guarantees optimal yield. This is because a large portion of the groundnut harvested is readily consumed in the country, hence there’s a readily available market for your product.

Overall, all you need to do to successfully plant and harvest your groundnut is to learn from this guide and to seek counsel from other groundnut farmers. 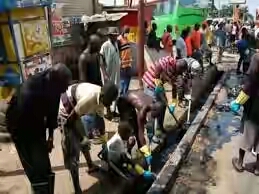