You are here: Home / Business / Agriculture / Cashew Farming in Nigeria: How to Start in 2019
Share2
Tweet
2 Shares

With Nigeria said to be the 6th largest producer of cashew in the world, cashew farming is one of the most lucrative farming options in the country. 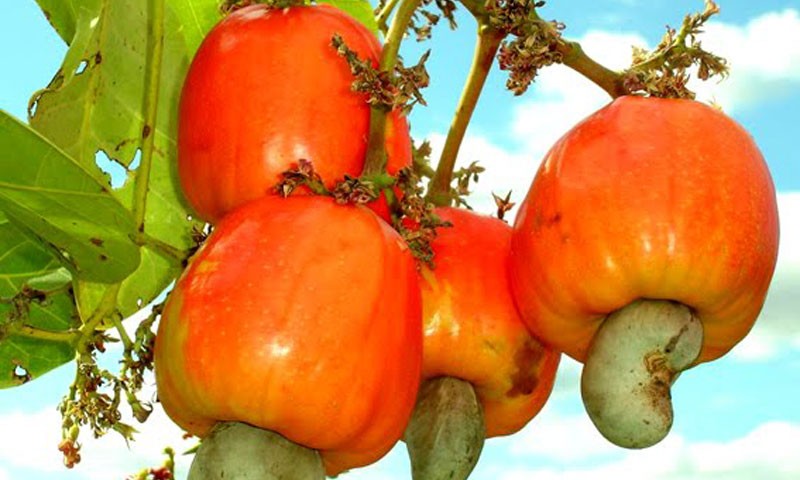 In this post, we take a look at how you can start your cashew farm in Nigeria. But first, let’s take a quick look at the crop itself – Cashew.

Cashew is one of the crops that grow seasonally. And its seeds are usually externally attached to the flesh of the fruit. It is a tree crop that is typically single-trunked and spreading in habit. It has an average height of 11m. When it grows older, the spread may be greater than height, with the lower limbs bending to touch the ground. The leaves of the cashew tree are quite thick and oval to spatulate in shape, with blunt tips and entire margins.

Cashew Farming in Nigeria: How to Start in 2019

Investing in cashew farming is a long term investment which can last more than 50 years. The most important product from cashew are the nuts which in high demand.

In Nigeria, cashew farming is quite popular with a total land area of 320,000 hectares being used for the cultivation of this crop. Since 1990, cashew nut production in the country has increased steadily from 30,000 MT in 1990 to 636,000 MT in 2006. This increase has been primarily due to the involvement of private entrepreneurs, Federal and State Governments, cooperative societies and affluent farmers.

However, 75 to 80% of cashew nuts produced in Nigeria are exported, as only very few companies are involved in local processing of the produce.

The effect of the government liberalization policy on commodity crops has led to an increased demand for raw cashew nuts in the recent past yet Nigeria still offers one of the cheapest sources of raw cashew nuts.

The cashew nuts produced in the country has been consistently supplied to countries like India, Brazil, and Vietnam where they are processed in cashew factories. These nuts are also accepted in countries like the USA.

Currently, Nigeria has about 600,000 surviving cashew trees spread across the East, West, South and Northern part of the country with an average yield of about 200kg to 400kg per hectare.

Since 2008, Nigeria has grown to become one of the major producers of cashew in the country and in 2010 the country was the largest producer of cashew nuts.

As stated earlier, Nigeria is the 6th largest producer of cashew in the world with an annual production volume of about 120,000 tonnes. Also, the cashew Industry in the country provides over 600,000 jobs and total annual trade worth N24billion, thus making the sector a major contributor to Nigeria’s non-oil GDP.

If you’re interested in starting your cashew farm, let’s take a look at the steps required to successfully produce cashew in the country.

There are three major varieties of cashew nut. These are the Brazilian cashew, Chinese cashew, and the Indian cashew. There is also the Hybrid cashew which is produced by the Cocoa Research Institute of Nigeria (CRIN). This variety is said to mature and produce fruits within 3 years.

This aspect is one of the most stressful parts of cashew farming. The planting starts from the nursery before being transferred to the field. If you choose to plant by yourself, use containers or plant directly into a prepared bed then insert 2-3 seeds into a hole of 2-3 cm depth.

Also, it is important the nursery is irrigated every day after 4-7 days the seeds will sprout. Like coffee farming, you should use fresh seeds. The viability last from the first day to 4 months after which reduction sets in. Dry the seeds under the sun for 3 days. Then soak them in water overnight before planting them the next day. The general spacing is 7m x 9m, however, you can still use these planting distances 8m x 5m to give 100 seedlings on a hectare, 7.5 x 7.5 to give 175 per hectare or 8m x 8m to give 156 per hectare.

At an early stage before the cashew tree grows and cover the farm you can inter-crop with cassava, plantain, pineapple, etc.

In order to ensure optimal growth of your plant, you should apply nitrogen, phosphorus and zinc fertilizers. This is because cashew crops need nutrients at every point in their development to grow faster and to produce good fruits. During the growing stage, you should use fertilizers and also during fruiting and flowering. You can also apply farmyard manure 15kg once in a year to the mature cashew tree.

Other aspects of planting include irrigation, pruning as well as mulching. You should irrigate your cashew farm during the dry season or when drought sets in during the wet season. To produce more fruits water them adequately and regularly.  You don’t have to water the plants during the raining season but irrigate them once in a week or twice during the dry season. In cashew farming, the 25-300C temperature is ideal for optimum growth. 6 hours of direct sunlight is needed every day.  You should not grow your trees under a shade or else they will not fruit.

It is also necessary to prune the cashew plants by cutting off entangled branches and removing the overcrowded area. Additionally, you should use compost manure in mulching the entire farm to reduce weeds growth and to conserve moisture.

Typically, cashews require warm, humid climate and the plant typically at a wide range of temperatures starting from 15 to 40oC. It is very important that the rainfall is well-distributed with a minimum of 600 mm rainfall.

The cashew plant can grow in different types of soils including sandy soil. However, for the best outcome of production, it is recommended to use a mixture of sandy and loamy soil. The planting involves using either seeds or vegetative methods such as grafting, budding, and layering.

If you’re looking to obtain a higher or earlier yield, the vegetative reproduction planting material is certainly a better option.

When it is time to plant, the recommendation is to plant your cashew at a distance of 10m x 5m, which will give the plant a density of 200 trees per hectare and at the same time provide adequate space for planting crops during the first few years.

Generally, cashew trees start bearing fruit in the third or fourth year and are likely to reach their mature yield by the seventh year provided the environmental and cultivation conditions are favorable. However, the cashew tree can live for up to 50-60 years and most trees produce nuts for about 15-20 years

When it is time for harvest, one of the first steps is to remove the branches hanging from the tree as they may interfere with the process. Typically, the average yield of nuts of a mature tree is in the range of 7-11 kg per annum.

One of the problems that can cause low harvest yield is the incidence of pests and diseases which can lead to significant damage to the production level. Particularly, insects can cause economic losses from 52 -75% of the level of production.  These include stem girdler (Analeptes trifasciata), red-banded thrips (Selenothrips rubrocinctus), fruit scrapper (Pachnoda cordata ) and root borer (Plocaecderus ferrugineus L.). These insect species have been known to reduce the production level by an estimated 52 to 75%.

Some of the major diseases that affect the cashew plant include Flower Die-back, Twig Die-back, and Root Rot. A disease like Flower Die-back reduces the overall yield of nuts on average by 38-70% while Twig Die-back causes more than 50% death of vegetative shoots of cashew. There are also losses due to root rot of cashew seedlings leading to a loss of up to 10-15% of the general cost.

Harvesting cashew is the most time-consuming event in cashew production. The trees are known to bloom for 2 to 3 months, and the fruit ripens about two months after flowering. The fruits should be gathered from the tree before they fall naturally. If allowed to fall on their own, the fruit can become damaged. Usually, the more the fruit ripens, the sweeter the tastes. By the time the fruit is gathered, the nut is fully grown for about two weeks and is ready for harvesting.

Harvesting involves using a sharp knife to detach the apple from the nut. If this is not done properly, the quality of the cashew nuts will be reduced. You should dry the nuts on a clean surface and keep turning them frequently to ensure uniform drying. Avoid drying indoors to prevent decay or using a metallic surface because of rust. Drying usually takes a few days and the dried nuts produce a rattling sound when turned.

Generally, cashews can be stored in for 12 months or more on the condition that they are dried, the content of moisture should be no more than 8 percent, and they should be packed in sealed plastic bags.  You can store them in jute bags and not in containers, sacks, plastics or their likes, stitch the jute bag to avoid spoilage.  Place the bags on wooden pallets in a dry place with good ventilation. Don’t place them on the floor to avoid moisture absorption that may spoil them. Leave a clearance of 0.5m between each bag for air to circulate properly, sell the nuts within the same year of harvest to avoid deterioration.

It is important that you must have developed a strong marketing channel prior to harvesting your cashew. You can find companies that buy them for export. Another option is to sell directly to foreign buyers. You can do this by using platforms like Alibaba to find cashew nut buyers. You can also advertise your product online and get distributors and suppliers to come and buy from you.

Now that you know what it takes to start a cashew farm, let’s take a look at some of the benefits of cashew.

Over the years, the cashew tree has been cultivated for food and medicine for 400 years with its different parts having economic value. This includes the apple, nut, and kernel.

The cashew apple which is also known as false fruit is an edible food rich in vitamin C and it can be used to make products such as jam or juices. It can also be dried, canned as a preserve, or eaten fresh from the tree. Additionally, it can be squeezed for fresh juice, which can then be fermented into cashew wine which is a very popular drink in West Africa.

The cashew wine is made in several countries across Asia and Latin America. The drink is light yellow and it has an alcohol content of 6-12 percent.

The primary product of cashew nuts is the kernel which is also known as cashew nut kernel. It is the edible portion of the nut and can be consumed directly by the consumer by preparing as roasted and salted nuts and in confectionery and bakery products. In this case, the kernels are finely chopped kernels and used in the production of sweets, ice creams, cakes, and chocolates. They can also be used as a paste to be spread on bread.

There is also the cashew nut shell liquid (CNSL) which is a vicious and dark liquid, which is extremely caustic. This liquid is a versatile industrial raw material with over 200 patents for its industrial application. One of its uses is as a raw material for phenolic resins and friction powder for the automotive industry in brake linings and clutch disks.

CNSL is said to be extremely valuable in the international market although it is not produced in Nigeria. However, imports generate almost US$10 million annually and it is expected that when the country starts exporting this commodity it would generate tens of millions of dollars.