There are over 200 ethnic groups in Nigeria and many of these cultures have unique delicacies.

In this post, we will highlight some of the soup delicacies of these ethnic groups. Also, you will get to know the ingredients used in preparing them and their health benefits. 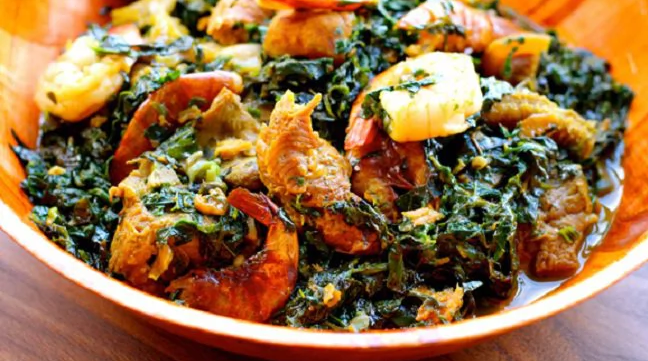 Banga soup is made from palm nuts and it is eaten by those in the Southern and Mid-western parts of Nigeria.

There is another soup that is quite similar to Banga, it is called Ofe Akwu which is popular among the Igbo culture. It is also made from palm nuts, but prepared more like a stew and it is meant to be eaten with rice.

Ceremonially, Banga soup is preferably eaten with a yellow thick starchy paste from cassava starch called “Usi” by the Urhobos as well as their Isoko and Okpe people.

Miyan kuka is very common among the Hausa people. It is made from powdered baobab leaves and dried okra.

Miyan kuka is also known as Luru soup is a type of Nigerian dish from the northern part of Nigeria. The soup is made from powdered baobab leaves and dried okra. It is usually served with tuwo shinkafa or dawa.

Ewedu is made with mallow leaves. It is a condiment to other starch-based foods such as Amala. It can also be added with gbegiri, a local Nigerian soup. In Northern Nigeria, Ewedu is referred to as Ayoyo. It is used to cook a sauce called (Miyan Ayoyo) which is commonly served with Tuwon Masara or Tuwon Allebo.

Ewedu leaf is an adequate source of fibre which makes it beneficial in dealing with weight management and may also promote intestinal health by helping with bowel movement.

The soup is an excellent source of vitamins and fibre. However, storage over a period of time tends to reduce the nutritional value.

Gbegiri is a bean-based soup from southwest Nigeria. This soup is best combined with Ewedu and stew.

This bean-based soup is loaded with the B Vitamins which is necessary for healthy brain and nerve cells, for normal functioning of the skin, nerves and digestive system.

Pepper soup is a light soup made from a mix of meat and fish with herbs and spices. It is one of the few soups in Nigerian cuisine that can be eaten alone and is not used as a sauce for a carbohydrate main dish such as fufu or pounded yam.

It can also be made with nutmeg and chili peppers. It is usually garnished with fish, beef, goat meat or chicken. Pepper soup is often an appetizer at official gatherings however, it is consumed also in the evening at pubs and social gatherings.

Afang is a vegetable soup that is popular among the Efik people, Ibibio people and Ananng people in the southeast of Nigeria.

Corn soup is also known locally as Omi ukpoka and it is made with ground dry corn and blended with smoked fish.  Corn is a good source of antioxidant carotenoids, such as lutein and zeaxanthin which may promote eye health. It is also a rich source of many vitamins and minerals.

This soup is common among the people from Agenebode in northern Edo state.

Egusi soup is thickened with ground melon seeds and contains leafy and other vegetables, seasonings, and meat. It is often eaten with amala, pounded yam, fufu, etc.

Egusi is packed with protein, fat and vitamins A, B1, B2, C. Also it contains alpha-tocopherol, a component of vitamin E. This alpha-tocopherol helps to maintain young-looking skin and good fertility.

Maafe is popular stew made with groundnuts (peanuts), tomatoes and onions as the base. It can be infinitely varied with chicken, beef or fish and different leafy vegetables for subtle flavours. This soup is packed with fibre and B vitamins.

There is a variant of Maafe which is the rice stew. It is made with goat, beef/chicken and cooked with a tomato, onion, pepper and groundnut sauce.

Groundnut stew is made with ground dry groundnuts and vegetables, fish, meat, local seasoning and palm oil by the Etsakor people in Edo state.

Groundnuts are packed with essential vitamins and minerals which include niacin, manganese, vitamin E, magnesium, folate, copper and phosphorus. Also, groundnut is a source of potassium, phytosterols, resveratrol and healthy fats, all of which may benefit health and help prevent chronic disease.

Ogbono soup is a Nigerian dish made with ground dry ogbono seeds with considerable local variation. The ground ogbono seeds are used as a thickener, and give the soup a black coloration.

Apart from the ogbono seeds, water and palm oil, the soup usually contains meat, seasonings such as chili pepper, leaf vegetables such as bitterleaf, tomatoes and okra as well as typical seasonings like onions, and iru (fermented locust beans).

Ogbono seeds are loaded with fiber, antioxidants and many other nutrients like iron, potassium, calcium, zinc and vitamins B and C.

Other popular Nigerian soups include: