Football is a very lucrative business and in this post, we take a look at the richest Nigerian footballers and their annual salaries.

John Mikel Obi shot into prominence when he became the subject of a transfer war between two top clubs in England, Manchester United and Chelsea F.C.

He was born John Michael Nchekwube Obinna on the 22nd of April 1987 and he currently plays as a midfielder for Chinese club Tianjin TEDA and the Nigeria national team.

He signed for the Chinese club Tianjin TEDA in January 2017 and he currently earns $185,611 per week and takes home an annual salary of $8.6 million with bonuses and add-ons. Mikel is said to be worth an estimated $57 million.

Mikel grew up in Jos. He started his official football career at the age of 12 when he was selected from over 3,000 young talents to play in Pepsi Football Academy. Mikel was quite outstanding and he was later picked to play for top-flight club Plateau United.

Odion Jude Ighalo was born 16 June 1989. He is a prominent Nigerian footballer and he currently features for the Chinese club Changchun Yatai.

The footballer is one of the richest in the country and he is said to be worth an estimated $15 million. He currently earns close to $10 million from his club, Changchun Yatai.

Ighalo started his career at Prime and Julius Berger before moving to Lyn Oslo in Norway in 2007. The footballer signed for Udinese in 2008 but spent most of his tenure loaned out. Ighalo eventually signed for Watford in 2014 where he shot into the limelight because of his frequent goalscoring.

Following a decline in form, Ighalo left Watford and joined Chinese Super League club Changchun Yatai for a reported £20 million on the 31st of January 2017.

Ighalo has also featured prominently for the Super Eagles, the Nigerian National Football team. He was invited by the coach at that time, Daniel Amokachi.

Ighalo is quite involved in philanthropy as he often dedicates part of his wages to charitable organisations in Nigeria to help impoverished children and widows below the poverty line.

Kelechi Promise Iheanacho burst into fame when he led the Nigeria U-17 squad to win the 2013 FIFA U-17 World Cup.

Iheanacho was born on the 3rd of October 1996 in Imo state and he currently plays for the Premier League club Leicester City.

Iheanacho is said to be currently worth an estimated $2 million

Popularly called Obagoal, Obafemi Akinwunmi Martins was born on the 28th of October 1984. Martins play as a forward for Shanghai Greenland Shenhua

He is one of the richest Nigerian footballers with an estimated net-worth of $35 million. The footballer earns $6.6 million at his current club.

Martins left Nigeria for Italy at the age of 16. He has played for a number of top-division clubs around Europe. He began his senior career in 2002 at the Italian Serie A club Inter Milan, before moving to the English Premier League club Newcastle in 2006, and then the German Bundesliga club VfL Wolfsburg in 2009. He joined Russian Premier League side Rubin Kazan in July 2010. Subsequently, he was loaned him to Birmingham City in January 2011.

The footballer won the Italian Serie A title, the Italian Cup (twice), and the Italian Super Cup when he was at Inter. He has also played European football with Inter, Newcastle and Wolfsburg, winning the UEFA Intertoto Cup with Newcastle.

In international football, Martins was involved with the Nigerian squad for the Africa Cup of Nations in 2006, 2008 and 2010, and for the FIFA World Cup in 2010.

Martins played for Seattle Sounders FC of Major League Soccer from 2013 to 2015, scoring 40 goals, before moving on to China.

Vincent Enyeama was born on the 29th of August 1982. He plays as a goalkeeper and was a member of the Nigerian national team from 2002 until October 2015, serving as its captain from 2013 until his retirement from international football.

He is also one of the richest players in the country with a net worth of $7 million. Enyeama is Nigeria’s most capped player of all time with 101. He began his club career at Enyimba International.

During his spell with Enyimba International F.C., he won the CAF Champions League twice. After three seasons with Enyimba International F.C. and one with Iwuanyanwu Nationale (now known as Heartland F.C.), Enyeama moved to small Israeli club Bnei Yehuda Tel Aviv. In his first season, the team qualified for the final of the Israel State Cup and, having finished fourth in the Israeli Premier League, for the 2006 UEFA Cup competition as well.

The goalkeeper moved on to Hapoel Tel Aviv in 2007. He was in the club till 2011 when he joined the French side Lille for an undisclosed fee on a three-year contract.

He returned to Israel a year later when he agreed to a one-year loan deal with Maccabi Tel Aviv in August 2012. He appeared in 27 Israeli Premier League fixtures and Maccabi went on to win the championship title.

Victor Moses is another prominent footballer that makes our list of richest footballers in Nigeria. He has a net worth of $23 million and currently earns over $3 million at Chelsea FC.

Moses was born on the 12th of December 1990. He currently plays as a winger on either flank for Premier League club Chelsea and represented the Nigeria national team until 2018 when he announced his retirement.

Moses began his career in the Championship with Crystal Palace, before his performances caught the eye of Wigan Athletic, where he made his Premier League debut in 2010. After two years, his game had improved to the extent that European champions Chelsea were interested, and he signed for them in the summer of 2012. Despite ten goals in all competitions during his first season, he spent his second season on loan to Liverpool, his third on loan at Stoke City and his fourth on loan at West Ham United.

He finally rejoined Chelsea for the 2016–17 season and featured prominently playing as a left flank defender.

Ahmed Musa was born on the 14th of October 1992 and he is a prominent Nigerian professional footballer who plays as a forward and left winger for Saudi Arabian team Al-Nassr.

His recent contract in Saudi Arabia has further cemented his position as one of the richest Nigerian footballer. He earns over $6 million per year as salary and has a net worth of $18 million

Musa became the first Nigerian to score in two FIFA World Cup competitions, after scoring twice against Iceland in the group stage of the 2018 FIFA World Cup.

Emmanuel Emenike is another popular Nigerian footballer that features on our rich list. He is worth a little over $3 million.

Emenike would later play for the likes of Fenerbahçe, Spartak Moscow and Olympiakos.

Victor Anichebe is another prominent footballer that currently plays for Beijing Enterprises as a striker. He makes our list as he is worth $18.5 million

Anichebe was born in Lagos, Nigeria before he moved with his family to Liverpool at the age of one.

He began his career at Everton. He made his debut in the reserve team as a 15-year-old and his first team debut less than two years later on 27 February 2006 against Chelsea, replacing Simon Davies.

Alex Iwobi was born on the 3rd of May 1996. He is one of the recent stars of the Super Eagles. Iwobi currently plays as a forward for Premier League club Arsenal and the Nigeria national team.

He was born in Lagos before moving to England at the age of four. Iwobi’s current salary is $3.5 million and he is said to be worth an estimated $5 million. 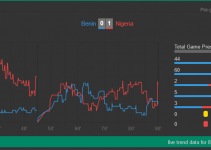