According to the Director General of Nigerian Civil Aviation Authority, Captain Muhktar Usman, out of the 146 private jets that fly into the country frequently, 46 of these jets are registered in Nigeria while 100 have foreign registration. It is also estimated that private jet owners in Nigeria spend an estimated N30 billion yearly on the maintenance of their jets. 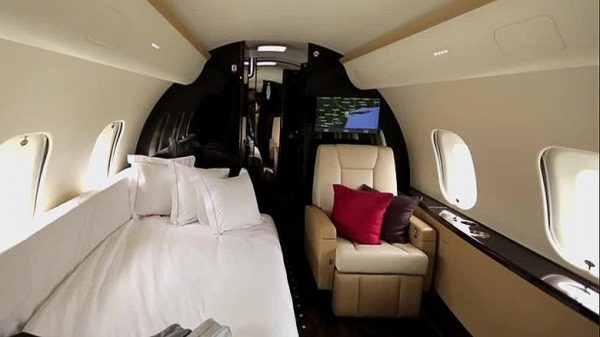 Private Jets in Nigeria & Their Owners

In this post, we take a look at the number of private jets in Nigeria and their owners.

Pastor T.B Joshua is the founder of the Synagogue Church of All Nations. He is said to be the owner of a Gulfstream G550 aircraft which he bought in April 2015.

Registered as “Synagogue Of Nations,” the jet was purchased using the Bank Of Utah trustee as the front for purchasing the jet. The jet owned by Pastor TB Joshua is said to be the most expensive of the four owned by Nigerian pastors.

The jet, which has US registration number N131LK, was built in 2010.  It was delivered to its first user in 2013 before making it to TB Joshua in early 2015.  Sahara Reporters learned that the jet made a voyage to Nigeria in December 2013, as the Bank of Utah was apparently pitching it to Pastor TB Joshua.  The man of God reportedly asked to see it and bless it before finally taking delivery.

It is said to cost up to $3 million to maintain the jet annually, depending on how heavily it is used.  It was also said that the jet was paid for by at least eight African Heads of State in 2014.  It was first kept in Israel before the tragic church collapse in September in which 116 persons, mostly South Africans, were killed.

He was the National President of the Pentecostal Fellowship of Nigeria on 7 February 2005, a position he held for five years. He is one of the few pastors in the country that own a private jet. He owns a Bombardier Challenger 601 aircraft. It was a gift to the Pastor when he marked the 40th anniversary of his call into ministry.

In 2014, the Pastor was embroiled in a controversial saga when it was said that the jet was used in smuggling $9.3m cash into South Africa

Folorunsho Alakija is the richest black woman in the world with a staggering net worth of about $1.2 billion. She is also one of the most influential women in Africa. She is the founder of Famfa Oil and the owner of the aircraft, Bombardier Global Express XRS.

He is the owner of Bombardier’s Global Express XRS private jet. The private jet was bought by Dangote from Montreal in Canada.

Popularly called the Jagaban, Bola Tinubu was the former Governor of Lagos state and he is one of the richest politicians in the country.

He was a senator for the Lagos West constituency in Lagos State, Nigeria in 1993 and the elected governor of Lagos State, holding office from 29 May 1999 to 29 May 2007

Bola Tinubu owns a P-CBT Falcon 900DX private jet which is said to have cost the politician $35 million.

Mike Adenuga is one of the richest men in Nigeria and Africa. He is the founder of the telecommunications company, Globacom and the oil firm, ConOil.

Currently, Mike Adenuga is the second richest person in Nigeria and he is said to be worth an estimated $9.4 billion as of 2019 according to Forbes.

He is reported to have two private jets which include a Bombardier Challenger 604, Bombardier Global Express XRS and a Falcon 7X.

Ali Modu Sheriff was the former Governor of Borno State. He was also a former Chairman of People Democratic Party (PDP).

In 2013, it was reported that Ali Modu Sheriff  purchased a top-of-the-range Gulfstream G650 private jet at an estimated cost of $72m.

According to Forbes Magazine, the Gulfstream G650 has an order book of 200 customers throughout the world and it is an ultra-high-speed, ultra-long-range business jet and the gold standard in business aviation. It is said that Ali owns 4 private jets out of which one is a Gulfstream G650 and 3 Dornier aircrafts.

David O. Oyedepo is a Nigerian Christian author, businessman, architect, preacher, and the founder and presiding bishop of the megachurch Faith Tabernacle in Ota, Ogun State, Nigeria, and Living Faith Church Worldwide, also known as Winners’ Chapel. He is said to be the richest pastor in the world with an estimated net worth of over $150 million.

He owns a Challenger 605 with registration N633WM which is used for the church’s world missions.

Orji Uzor Kalu is a billionaire and a business tycoon. He was a two-time Governor of Abia state. He is the chairman of SLOK Holding and the Daily Sun and New Telegraph newspapers in Nigeria. Orji Uzor Kalu owns a Gulfstream IV and Bombardier’s Global EXP XRS.