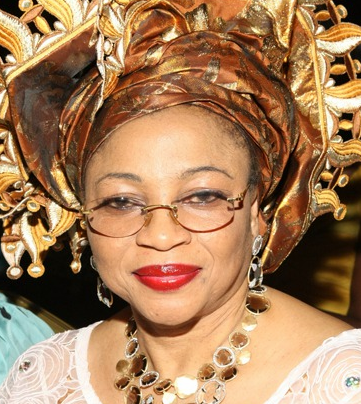 Folorunsho Alakija was born in 1951 in Ikorodu, Lagos stateof Nigeria to the family of Chief L.A Ogbara.

She returned to the United Kingdom where she bagged a diploma in Secretarial Studies from Pittman’s Central College.

At some point in her life, she decided that she was interested in fashion business and this led her to study fashion design at the American College, London and the Central School of Fashion.

In 1974, Folorunsho returned to Nigeria to start her career as an Executive Secretary. She worked with Sijuade Enterprises, Lagos and First National Bank of Chicago also in Lagos.

She quit her job at First National Bank of Chicago, Lagos to follow her dream of investing in the fashion industry. She established Supreme Stiches, a tailoring company which eventually became Rose of Sharon House of Fashion.

May 1993 was when fortune finally decided to smile on her for good. She was one of the few Nigerians who were lucky enough to win a bid for the allocation of Oil Prospecting Licenses (OPL). She won the bid for allocation of an OPL to her company, Famfa Limited.

In 1996, she appointed Star Deep Water Petroleum Limited to act as technical advisor for the exploration of the OPL and transferred 40% of her stake to Star Deep Limited.

In 2013, Folorunsho Alakija was appointed as the Vice-Chairman of the National Heritage Council and Endowment for the Arts by the Federal Government of Nigeria. She and other appointees on the board which include several other wealthy Nigerians like Igho Sanomi are to oversee the protection and conservation of all places and objects of heritage significance in Nigerian.

Mrs Alakija has an impressive portfolio of investments and assets, one that would make anyone green with envy. She has houses in some of the choicest areas in London, United States and in The Middle East.

She runs a charity foundation known as The Rose of Sharon Foundation with which she helps to take care of widows and orphans; empowering them through scholarships and business grants.

She is really one woman that can be said to have it all.

Richest Woman in Nigeria: Things You Didn’t Know about Her

A little over a decade ago, not much was known about Folorunso Alakija. But in the last few years, this amazon has blazed the trail to become the richest woman in the country.

Although she was born in 1951 into a wealthy polygamous home of the Ogbara in Ikorodu, Folorunso Alakija had to find her path to wealth. She was initially a secretary at the International Merchant Bank but she resigned years later to study in the U.K.

In this article, you’ll get to know several things about this woman of many parts.

Also, she’s listed as the second most powerful Nigerian woman after Ngozi Okonjo-Iweala and the 87th most powerful woman in the world.

It was reported that she lavished over N2 billion on her son’s wedding, Folarin Alakija. He married Nazanin Ghaissarifa, an Iranian Beauty. Nazanin studied Bioengineering & Biomedical Engineering at the University of Manchester.

Their wedding venue at Woodstock cost over N15 million. Also, the wedding had over N1 million roses which was done by Jeff Leatham who is said to command excess of N100 million for flowers. The cake at the wedding was also said to cost in excess of N1 million.

The singer Robin Thicke performed at the wedding. His usual rate is in the range of N68.2 million.

#4 The name of her fashion house was Supreme Stitches

Supreme Stitches was born after her sojourn in England to study Fashion Design. She returned to the country and founded this company which enabled her build network with the high and mighty in the country which lated paved the way for opportunities in the oil sector.

Although she had no knowledge in oil exploration she decided not to sell her licence unlike many of her contemporaries. Eventually, she partnered with Deep Water Petroleum Limited, a subsidiary of Texaco in which she made the company the technical adviser for the exploration licence. This led to her selling off 40% stake of company shares to Deep Water.

In 2003, her OPL licence was converted to an OML licence which gave the Nigerian Government a 40% stake in the company

She had a running battle for 12 years with the Federal Government during the Olusegun Obasanjo regime when the later reduced her shares percentage to 50% however she would later win in court after 12 years and her shares ownership was returned to 60%.

With her 60% shares in Famfa Oil, Alakija earns an average of 10 million dollars daily after taxes and other settlements.

#7 She’s into real estate too

Folorunso Alakija has a real estate portfolio of over $100 million. It was recently reported that she acquired a property at OneHyde Park for $102 million

#8 She owns a Bombadier jet

Alakija owns a Bombadier jet which cost her $46 million.

She’s happily married to Modupe Alakija and they have four grown up sons and one grandchild. One of her sons recently remarried after losing his first wife to cancer. The wedding was certainly a show of class with over N2 billion.

#10 She still cooks for her husband

In an interview in 2014, she stated that she still cooks for her husband. Although she has cooks, Folorunso still creates time to prepare her husband’s food. She believes this gives a personal touch to the meals.

#11 Love is her most prized asset

Although she has lots of money, Folorunso Alakija believes love is the most important thing for her. She met her husband as a 21 year old lady and she believes it is love and not money that has kept them together all these years.

#12 She’s involved in the printing industry

She owns the Rose of Sharon Prints and Promotion Limited and the Digital Reality Prints Limited.

She is the founder of Rose of Sharon Foundation, a non governmental organization that helps widows and orphans by empowering them through scholarship and business grants.

She also sponsors medical and engineering undergraduate through the Agbami Medical and Engineering Scholarship Scheme.

Particularly, Folorunso Alakija has a love for students and she further reaches out to them through the Folorunso Alakija Scholarship Scheme which has helped several indigent Nigerian students who can not afford good quality education

#14 She is related to DJ Xclusive

The British Nigerian, DJ Xclusive is related to her. DJ Xclusive whose real name is Rotimi Alakija is a prominent Nigerian disc jockey, record producer and recording artist. Some of popular singles include Shaba featuring Kcee, Jeje featuring Wizkid and Shawarma featuring Masterkraft.

#15 She started her career as a secretary

Folorunso Alakija started her career as a secretary at Sijuade Enterprise before moving to the banking sector where she worked for many years. She worked at the First National Bank of Chicago which became FinBank before flying to England to study Fashion Design at the Pitman’s Central Colege in London.