Many years ago, Nokia was king when the conversation revolved around mobile phones. At a point in their reign, it was nearly impossible to find someone with a mobile device that wasn’t a Nokia.

For many years, the company was releasing successful models that fans couldn’t get enough of, and their market share was growing at a rapid pace. Then something happened that turned the narrative around and led to this undisputed heavyweight to began playing catch up in the mobile phone scene.

The Android and the Apple iOs were introduced in to the mobile phone market and this signalled a shift that caught the Nokia brand unawares. As a result, within a short time frame, Nokia had begun to sink into losses and within a few years, the once unbeatable Nokia had filed for bankrupcy.

When the software giant, Microsoft attempted to save the day by acquiring the company in 2014, many thought things would turn around but it seemed all they did was to further sink the Nokia ship. In fact, many critics would later label the Microsoft’s decision to acquire Nokia a very terrible one.

However, in recent times, some things have begun to happen. And it looks like Nokia might just be on its way to gaining some of its lost market share. In fact, many optimists are claiming that the Nokia brand is back with a bang and one company which seems to be at the centre of this is HMD Global.

The company was specifically set up to build the next generation of Nokia phones and they seem to be playing the right cards. HMD Global has embraced the Android operating system and their pioneer product in this regard is the amazing Nokia Edge. 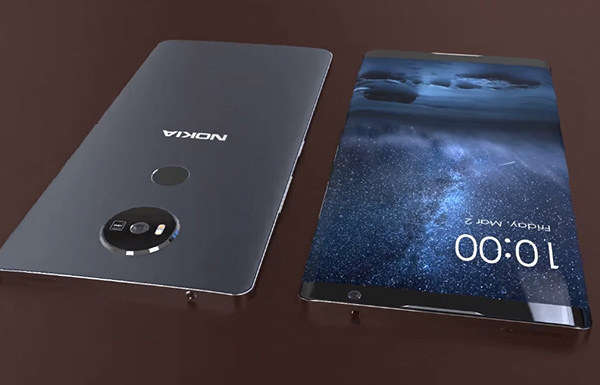 In the last few years, one of the major struggles of Nokia had been their inability to dominate the high end mobile phone market. But the Nokia Edge seem to be a bold statement here and this product along with the subsequent one’s in this series might just put Nokia back on track to gaining a portion of the high end market share.

The Nokia Edge was launched in January 2017 and since its release it has garnered a whole lot of positive reviews as a result of its outstanding specs.

In this post, we will be taking a look at the specs of the Nokia Edge while critically reviewing these features.

The phone comes with an edge to edge display which makes it a completely buttonless device. However, you can find the necessary controls just above the primary display which you can use for volume control and to check notifications.

Also, the Nokia Edge has a 5.7 inch AMOLED display with a screen resolution of 1790 x 2790 pixels and a 441 PPI pixel density. The AMOLED display is a novel technology that is fast replacing the LCD display as many manufacturers are beginning to embrace it,

The Nokia Edge comes with a 6GB RAM as well as two ROM variants, 64GB and 128GB. Interestingly, the ROM can be expanded to 256GB using a microSD. As a result, with this Nokia phone you certainly have a reasonably large memory to work with.

Nokia Edge has been applauded by many for the quality of its camera. In fact it is said that you can take shots that can be mistaken for a DSLR camera. The manufacturer deploys the Carl Zeiss technology which has been used in the previous Nokia phones. The Nokia Edge comes with a 24MP rear camera and a 12MP front camera

The phone comes with a 3800mAh non removable battery which gives you an excellent battery life which is a must for a device of this calibre.

Apart from this flagship product by HMD Global, there are rumours of exciting Nokia Edge variants coming up soon probably in late 2017 or in 2018. Some of the names we’ve oftenheard include the Nokia Edge Pro, Nokia Edge Premium and the Nokia Edge Mini.

As a matter of fact, the Nokia Edge Premium has been nicknamed the Beast due to its range of outstanding features such as its 12GB RAM, dual 24MP camera and so on.

Additionally, we’ve highlighted some of the specs of the upcoming Nokia Edge Series as a way of informing of the disruption that might be hitting the mobile phone industry with these series.

The Nokia Edge Mini comes with a unique bezel-free Super AMOLED touchscreen which makes it easy to prevent unintentional touch by the user. Also, the phone comes with a 5.5 inch and just as the name implies it’s smaller than its predecessor, the Nokia Edge. With this screen size, the phone has a screen to body ratio of 95%.

The phone has been called a mini beast due to its novel processor. It comes with a Qualcomm Snapdragon 836 chipset in addition to an Octa-core CPU and an extra processor called the Adreno 550 GPU. This combination gives the Nokia Edge Mini an incredible power and performance which you can’t find in any device of its size.

The Nokia Edge Pro is another Edge series that is being highly anticipated. One unique feature is the 5000mAh which can last up to 2 days without charge.

It also comes with adequate ROM of either 128GB or 256GB. However, the ROM is non expandable.

The camera of this Nokia is also quite impressive. The main camera at the back has a 42MP which is built with a Carl Zeiss optic lens. On the other hand, the secondary camera is 20MP which you can use for your selfies.