John Michael Nchekwube Obinna, simply known as John Mikel Obi is a Nigerian born professional footballer who plies his trade in the UK’s Barclay’s Premier League for Chelsea Football Club. He is one of the most decorated African footballers and he is also one of the richest footballers in Nigeria.

Born April 22, 1987 the old midfielder from Plateau state, specifically Jos almost signed for Manchester United from Lyn Oslo in 2006 before making a last minute U-turn to sign for Chelsea from the Norwegian football club for £16Million, of which £12Million was paid to Manchester United for their troubles, and upon agreement. 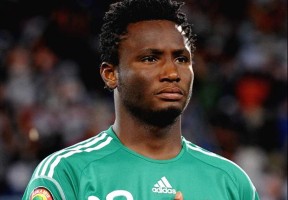 Mikel Obi, is on a current salary of £75,000 per week and an annual take home of £6.5Million with bonuses and add-ons after signing a contract extension with Chelsea in 2012. Mikel is also a brand ambassador for some top brands. In 2014, alongside top Nigerian actress Genevieve Nnaji, he was unveiled as a brand ambassador for Amstel Malta; he did an advert for the brand and left… Left with N800Million (that is a lot of money!). His sign on fee was said to be the highest any African celebrity figure has ever signed for. It was also said to be a five year deal.

Prior to that, he signed a deal with Peak, the giant milk producing brand. The deal was worth around N20Million and lasted a period of two years. Obviously, those were his younger days. His spouse is a Russian model from a very wealthy background. His UK mansion is worth over £200,000, his cars like the Range Rover Sport, a Bently Continetal GT, and a Mercedes G-Wagon are worth a total of £650,000.

John Mikel Obi is reported being scouted by both Chinese and Turkish clubs who are ready to pay him as much as an annual salary of £7Million – £9Million should he decide to sign for their football club. That may yet happen in the summer, meaning more reasons to smile to the bank.

Overall, John Obi Mikel is said to be Worth a commanding $25Million.