Michael Adeniyi Ishola Adenuga, simply called Mike Adenuga is a business tycoon and one of the richest people to emerge from the continent of Africa. His father, Chief Agbolade Adenuga was a school teacher and his mum, Juliana Adenuga, who comes from a royal ijebu family, was a known businesswoman. He was born in 1953 in Ibadan, Oyo state, Nigeria. He received his secondary school certificate from Ibadan Grammar School and he worked as a taxi driver in the US to fund his University education after gaining admission to Northern Oklahoma State University and furthered in Pace University, New York with degrees in Business Administration. 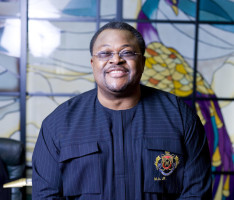 1991 was the breakthrough year, as his company, Consolidated Oil struck oil in the shallow waters of Ondo state, the first indigenous oil company to do so in commercial quantity. While his company continued to grow financially and 1999, he applied for a conditional GSM license just when it got introduced to Nigeria but it was revoked. He applied again in 2003 and it was approved. His telecom company Globacom rose quickly and stopped its counterpart – MTN from monopolizing the telecoms market.

His Globacom Company quickly rose to fame in the first five years of its launch and began spreading to other African countries including Ghana and Benin. Presently, Globacom is the second largest telecom operator in Nigeria and a number of other African countries. Mike Adenuga is also the second richest person in Nigeria after Aliko Dangote, and the sixth richest person in Africa. He won the Entrepreneur of the year at the Telecoms Awards in 2007.

His other investments include a stake in the Equitorial Trust Bank and Real estate investments in Nigeria, UK, US, and a few other countries. He owns and stays in a N900Million mansion in the prestigious Banana Island in Lagos. His Consolidated Oil Company now goes by the name ConOil and in 2015; he moved to take over Ivorian mobile telecoms’ operator, Comium Cote d’Ivoire for $600Million.

The father of seven is reportedly Worth a Whooping sum of $3.2 Billion.