Companies can express these responsibilities through reduction of the waste they produce or disposing them in environmental friendly ways such that little or no damage is done to the community’s ecology.

Nigeria is surely blessed with many natural resources. As such, she attracts investments from local and foreign companies like the rose attract the bee; but are these companies living up to their responsibilities by contributing towards educational and social programs? Are they aiding the government in its endeavors to reduce unemployment? Most importantly, how do they treat our land, air and water?? Do they see them as natural resources that are worth conserving or as a means to bigger earnings? The answers to these questions may shock you irrespective of the things you have heard or seen but they are worth bringing up during this euphoria of change.

Since corporate social responsibilities have been left in the hands and consciences of companies, it follows that the company decides what to do as its corporate social responsibilities. In most places around the world, these companies are bound to operate in manners that are responsible because of the pressures they get from responsible politicians who are really concerned about their communities and the environment.

In Nigeria however, our politicians have been more concerned about their own booty than the welfare of their people; this has resulted in great capriciousness on the part of companies who know they could get away with anything as long as they keep the corrupt public officer happy with bribes.

This has resulted in a number of misuses and irresponsible practices: The pollution of the waters of the Niger Delta is the most popular example of this irresponsibility. It has been reported that oil spills twice the size of the one that occurred in American gulf in 2010 happens in Nigeria every year.

Yet, it has never been publicized and no issue has been made out of it until after that of America. Is it that the companies don’t know that the spillage destroys people’s livelihood? They did. They just don’t care; as long as they can bribe officials and give out a few scholarships each year, they were revered.

In a Gombe state community in northern Nigeria, a Chinese mining company mines gypsum, and other minerals used in cement production. The operation is supposed to be safe in a controlled environment yet, the company has thrown away health and safety measures and has contributed greatly to damage the health of its workers and the citizens of the community where they operate. What is more annoying is that all their staffs are Chinese. Jobs that can easily be handled by Nigerian graduates are handled by expatriates and nobody blinks a lash.

What does the company do to compensate this community? Nothing! Just build a tarred road to the community and bribe a couple of politicians and everybody is happy!

And these examples abound in disturbing numbers.

So you see, despite the fact that there are talks here and there about corporate social responsibilities, most companies in Nigeria are not aware of what it really entails and how to carry out their CSR. Some destroy the ecology of the community where they work and damage the health of people who live in the communities where they operate and then give scholarships to a few of their children then everybody keeps quiet.

I was opportune to be in Eastern Europe a while ago and companies there are expected to spend at least 1.5% of their net profit in CSR. It follows therefore that Oil companies in Nigeria that make about N1 trillion net profit per month (using the 2013 statistic) should have invested up to N10 billion in the communities and their people they relate to. The Chinese mining company that reported a net profit of about $10 billion dollars annually should invest $100 million in the community and her people.

Now stop for a moment and imagine how far $1 million dollars will go in cleaning up the Niger Delta. Think how much $100 million dollars can go in providing community health insurance for a whole state. Then imagine that these companies actually release these funds but then they end up in the pockets and banks accounts of corrupt official.

What do you think? Got comments?? Drop them we love to interact! 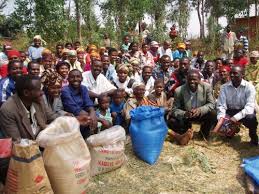