Dangote is undoubtedly a very rich man. He is actually the richest black man in Africa. It should not surprising that he has all the best things money can buy.  He has a great mansion, which is undoubtedly one of the most beautiful in Nigeria. He also has some of the most beautiful cars in Nigeria. Mention should also be made of Dangote’s private aircraft. 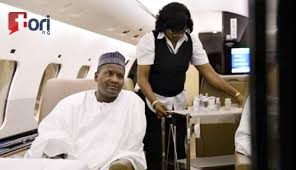 Name of the private aircraft is Bombardier’s Global Express XRS.  The plane was delivered at the Murtala Muhammad International Airport in Lagos.  Dangote bought the plane from Montreal Canada.  There are top class flight facilities in the aircraft. If the truth must be told, the aircraft is the most luxurious in the world.

The aircraft can sit up to 8 people conveniently and it is usually packed at the General Aviation Terminal very close to Associated Airline’s hangar.  The cost of the aircraft is $45m. Dangote bought the aircraft when he was 53 years old; he actually bought it on his 53rd birthday.

The design is top class and it is built for nothing other than comfort. The airport can travel from Nigeria to china nonstop and this makes it one of the strongest aircrafts in the world.  Many other Nigerian rich men area also buying into this same type of jet and the company selling it actually started that 2 other Nigerians have also ordered for the same aircraft.

Dangote actually has 2 private jets.  The second one is also as good as the first one. It is also made by the same company that made the first one.